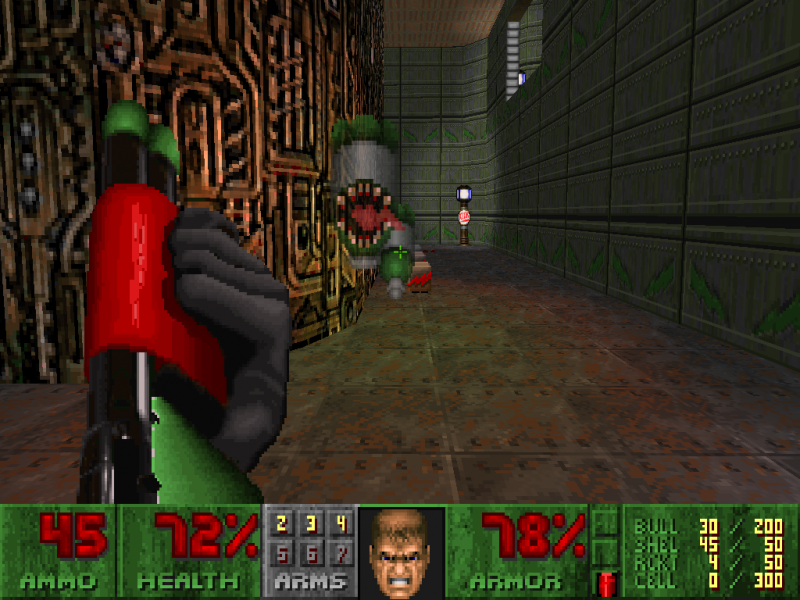 "Using games as advertising platforms is no strange business."

Gamers are more than familiar with the deluge of tie-in shovelware known as "licensed games", and some people are also pretty familiar with the rare licensed game that doesn't make a player want to gouge their eyes out. Doom fans, of course, are familiar with Chex Quest, which was far more fun than it had any right to be. Chex wasn't the only company to make an interesting little .wad for their brand, though. There was, for example, Kick! The hardcore, psycho, nitro drink in a can! Not familiar with it? I don't blame you. A quick glance at Wikipedia says that Kick soda was a citrus drink that tried to appeal to the extreme sports, punk, and gamer demographic--and flopped hard on its face. Oh dear. Well, that's not important, I suppose.

Kick Attack exists in two .wads depending on whether you iwad of choice is Doom or Doom II, but the game remains mostly unchanged. The actual .wad itself is a partial conversion, boasting not only a whole one map but several redone textures, weapons, and enemies, as well as new sounds. Most of the new graphics are simply variations of textures with the word Kick or the logo emblazoned across, which differ depending upon which iwad/pwad combo you use, but in both versions there's a few interesting new designs for the enemies.

The Lost Souls, for example, are now upside down soda bottles with sharp teeth and a thirst for blood, and probably wouldn't be that far out of place in a campier horror setting. The Spider Mastermind, though, is the most interesting example of the batch, now a giant bottle of "Alpine Spew" with two Hitler-esque gatling guns carried under the arms. Unfortunately, being made in the time before Decorate, none of them have any new behavior, but it's still a refreshing sight to see some new enemies. Call it heresy, but sometimes shooting something other than a bog-brown imp is a welcome sight.

The map itself, though, seemed to have gotten the shaft during all of the time dedicated towards graphics. It's supposed to be a Kick bottling plant but is instead a bog-standard 90s map with the gritty green-brown industrial theme, absolutely no sensical layout, and little decoration beyond the logos emblazoned in the texture and the occaisional light or pillar. There's no delusions that this is a slapped-together video game level without much thought to design, and the result is just stale to go through. Fight monsters, go through door, grab key, ho hum, motions Doomers have gone through thousands of times before.

From a purely technical standpoint, it flows all right and plays all right; it's reasonably small in size and certainly not difficult at all, next to impossible to get lost in and what backtracking exists is kept to scant seconds. Unfortunately, there's nothing interesting in the environment that makes you care about going from room to room or even to set rooms apart. It's ironic that for a .wad full of custom textures and graphics, the visual presentation is so dull that going through it feels infinitely more of a chore than it really is.

Kick Attack is an interesting curio that may leave people hemming and hawing for a few moments, but isn't really that noteable for more than a few plays and maybe a few resources. It's undeniable that genuine effort went into it, and maybe some genuine love, but the entire thing lacks any spirit that makes it worth keeping for anything aside from sheer novelty. It's a corporate shill of a game from start to finish, with very little other purpose than to get Kick out on the map--and, of course, Kick ended up getting barely even a footnote on a Wikipedia page.