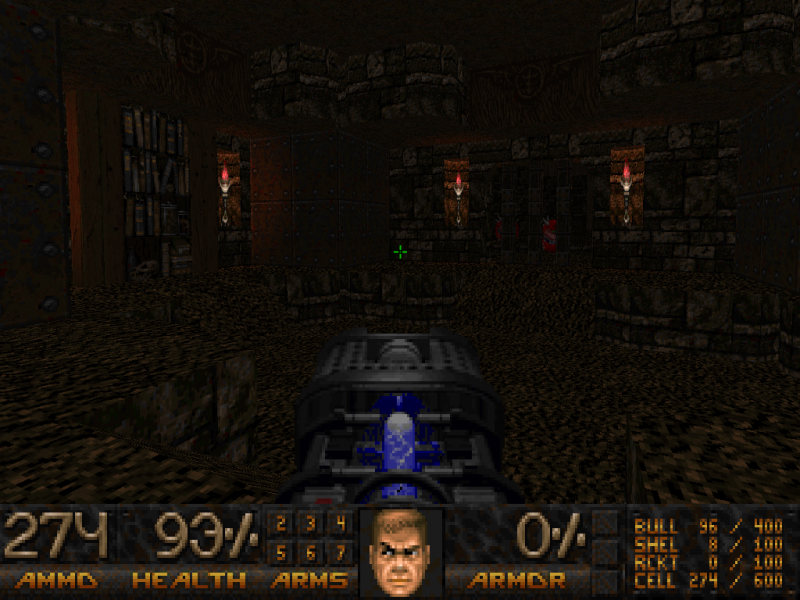 There's nothing sweeter to me than taking an environment and just going through it to admire it from every angle--no being stuck at ground level, no staring up from the dirt, no being unable to go any closer because you're at the edge. It's just pure freedom for a few seconds that prepares you for what's to come.
I bring this up because the very first map of Dissolution is a little fly-by cutscene. It claims to be seven-level mapset, but it's actually six--the first level is pretty much nothing but swooping around and some text, and the action only really starts on Map02. Still, just like it should, the intro sets the tone for what the rest of the playthrough is going to be like. It's lonely, it's oppressive, and there's going to be a lot of brown everywhere.
A lot of it.

Dissolution is a sister wad of "Project: Slipgate", which thankfully doesn't require any knowledge of beforehand in order to play, though those familiar with it will be getting heavy strokes of deja vu. It (like Slipgate) makes heavy use of custom textures, graphics, and sounds, providing a much darker experience in line with Doom 64 and Quake rather than typical Doom. Rather than power metal blasting in the background while a brightly lit blue-green techbase and the screams of zombies surround you, instead the environment is distressingly oppressive and lonely. And brown. Very, very brown.

For as much as people like to joke about Quake's grey-and-brown color palette, it's still an ideal colorscheme for people that want an extra kick in atmosphere--it may not be original, but the colors are visually putrid and pave the way for a creepy, gritty, and disgusting atmosphere. Dissolution uses them to excellent effect, creating a world that is unquestionably a ruined wasteland; if there has to be a downside, and there always has to be, it would be where the devil lies.
The overall detail level is unfortunately fairly low, especially for being a 2002 mod, with areas made up of mainly flat walls and flat floors. That being said, the textures and architecture more than makes up for it. While everything can be distilled down to boxes and curves, they're not obtrusive and everything flows together wonderfully--very little time will be spent thinking "This could use some more nodes".

While the visuals take a more atmospheric bent, the gameplay takes a significantly slower bent to match. Item placement is surprisingly tight, and very often will there be only one weapon with any ammo left as the trek goes on--monster count is incredibly low to match, with not a single map exceeding the 100-monster count. In fact, a few maps don't even leave 10. Players who want a run-and-gun experience will be woefully frustrated, as the idea seems to be more to go through the levels rather than FIGHT through them. Even the end climax isn't even anything worth sweating over, and is easily dispatched with a few simple BFG shots or rockets.

The levels are deceptively linear despite their intricate designs, though there's a few not-always-obvious locales of importance to backtrack to. As much as it adds to the creepy and totally-lost atmosphere, realizing too late that you were supposed to go to THAT door and hit THAT switch all the way at the beginning gets frustrating. Thankfully, these areas are few and far in between, but a better sort of indication of what needs to be done would be a nice touch.
Several times the maps also relies on shoot/use-the-panels type puzzles, but panels are certainly in no rare supply to begin with. While thankfully there's never an instance where you have to hit an obscure panel across the map (in fact, almost all of them are right next to the door that needs opening), oftentimes there's no indication that a panel even needs to be hit in the first place to proceed. These are, however, minor quibbles. The gameplay overall is excellent, echoing the lonely sensation that the map designs provide with fewer monsters and less hectic firefights, though it's a shame that there couldn't be a greater climax to top it all off.

Dissolution overall is a wonderfully slow-paced mapset that stands out among the crowds of "more monsters = more fun" mindsets that populate the modding scene. With superior visuals and atmosphere, it proves that you don't always need an escalating series of battles in order to stay in the mind. Sometimes you just need to make the player feel like they're truly alone. Even those who want nothing but seas of corpses would probably do well to give it a shot, because no other sensation will truly be like it.