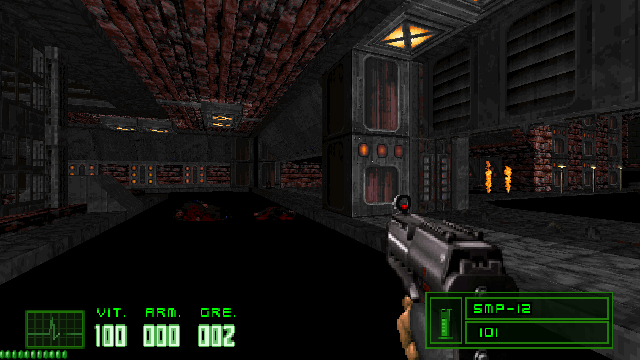 Killing pixelated nazis never seems to get old. Since the good old days of the original Wolfenstein 3D on DOS, passing through all the great WolfenDoom mods that have spawned every since, here we have Kriegsland II - Untergrund.

Made by GAA1992, that's a sequel to Kriegsland: Blutorden, a well received WW2/Wolfenstein themed mod. In Kriegsland II, you'll see a very different take from the first, ranging for a more complete (but not boring) gameplay. Forest Tyler (the mod's protagonist) has many tricks out-of-the-box, partially thanks to his glasses that grant a nice HUD, Nightvision and zooming view! While this mod does not have the astonishing laser effects, dozens of weapons, cross akimbos (YET), sliding and spetacular effects from the first, you'll notice that weapons are far more simple, more effective, more satisfying to shoot, game looks more beautiful in general.

The mod also has a lore attached to it, set in an alternate reality where nazis won the second world war - just like in Wolfenstein: The New Order. You must fight against nazis in K2's own version of the 80' which is pretty much a sci-fi setting.

You can check this and much more at the official Kriegsland II - Untergrund thread at ZDoom.org.