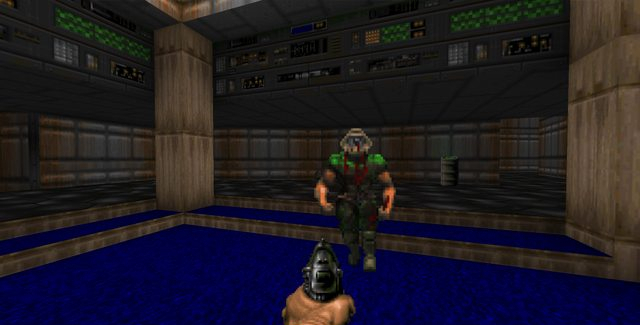 Taking inspiration from classics such as Resident Evil franchise, the modder mrtaterz brings Survival Horror Doom to us, a mod that, as the name implies, intent to turn the fast paced, arcade slaughterfest gameplay of Doom into a survival horror experience.

Right from start, you'll notice that you're no longer a fast as lightning protagonist, but a regular, more human-like speed Doomguy. The weapons have slower firing rates, are less accurate and enemies takes a lot more punishment before falling - and still, they can rise up again sometimes. Healing items were also altered, so you won't get an instant healing. Instead, stimpacks and medikits are stored in the player inventry, being used as consumables that will heal you over time. As a whole, the gameplay have this slight Hideous Destrutctor feel, which puts a vulnerable player against demons that really feel like a threat rather than meat bags, which is really nice.

At the time of this writting, the mod just entered beta stage. Shows a lot of promise, and mrtaterz are pumping lots of updates over the last few days. Check it out at the official thread at ZDoom.org.