Three Is A Crowd feels uniquely different as a vanilla MegaWAD 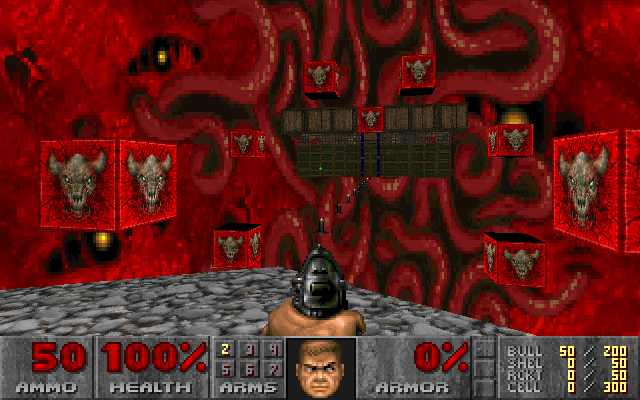 In the world of DOOM megawads, we are either met with a cacophony of quality (BTSX), a,summary of ingenuity (Cyberdreams), an avalanche of enemies (Hell Revealed) or an accolade of fun and exciting times (Demonfear). Scypek2 participated in the NaNoWADMo last year with his megawad Three Is A Crowd, creating and finishing 19 levels, but obviously the end was not near, and so work continued. Recently, the full package came out, with Scypek2 getting assistance from a little help of his friends, with names like Doomkid, Ribbiks, Valkriforce, Chaingunner, MTX1996, OSJCLatchford, Doom_Dude, Bolymr, EarthQuake, 129thVisplane, Eradrop, Ryath all contributing in some way, shape or form.

Three Is A Crowd tells a story of three people, facing different challenges as they set off on separate yet intertwined paths. It also shakes up the usual techbase-hell progression a bit. Overall, it's considerably vanilla, with just a few new textures, but it has its own unique feel and features plenty of variety and surprises among the levels... if you're playing in a port that supports demo playback, just stay on the title screen for a while and you'll see what I mean.

When you view the screenshots, its obvious Three Is A Crowd does not ''feel'' like your usual megawad. What is on display, highlights new and unexplored caverns of creativity leading to a levelset that, atleast by its looks, definitely is in a league of its own, with mostly stock textures. Equally impressive is the extensive range of vanilla trickery employed here. From 3D beams to cleverly constructed sector lighting, Three Is A Crowd is both a looker and a stunner at once and manages to be one of the more ''unique'' looking WAD sets seen this side of summer. Are you prepared to eat your slice of DOOM a little bit different this time around? Then check Three Is A Crowd out,  a WAD set that could very well be the surprise release of 2020.