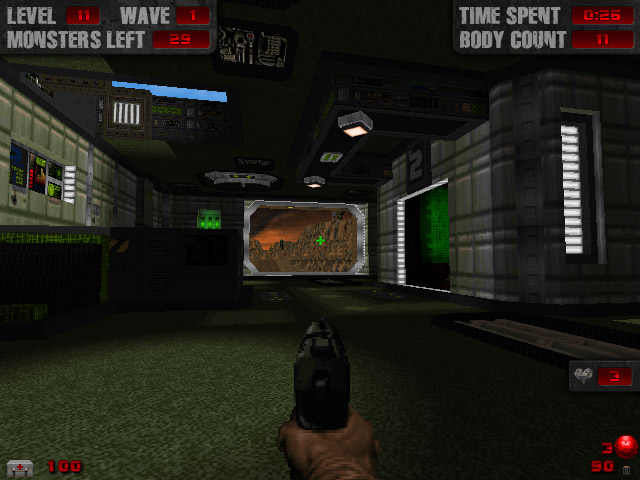 "On The Edge of Chaos. Classic Doom meets Tower Defence"

Doom 2 still lives. Behind the scenes, a large and active modding community works through the night to produce hellish delights from an age without polygons. Stronghold: On The Edge Of Chaos is one of the largest releases in the history of the Doom scene, using every last facet of the new-generation GZDoom engine to give us a solo (or co-op) experience that blends classic high-speed FPS excess with modern design and gameplay elements.

A multi-year endeavour by a large mod team, Stronghold attempts to blend classic Doom gameplay with modern standards like Tower Defence  and Horde/Survival modes. You’re tasked with defending various bases around the universe, fighting off successively large waves of monsters and surviving to collect your paycheque at the end of the mission. You take your bounty back to the persistent mission hub, where you spend it on deployables (such as gun turrets) and powerups, and then go do it again for 40+ missions, each one presenting a bigger, more dangerous environment to defend. There’s 18+ weapons to play with, dozens of new enemy types, a great soundtrack and a lot of cool design elements.

It’s also designed for co-op. The game scales to the number of players, adding more monsters, more ammo to kill them with, and more opportunity to defend multiple fronts simultaneously. As you progress through the missions, new objective types crop up, like trying to defend a series of control points from an enormous marauding boss-monster, or perhaps trying to stop enemy progression through a large multi-tiered base. It’s well worth playing.

As the Doom scene is very old, and very well established, there’s really not much instruction on actually installing and running mods like this – they assume that you already know what you’re doing – so I’ve put together this basic newbies guide.

Get Doom 2. You can buy it off Steam for $10. Well worth the money, as there’s countless thousands of mods and maps for it. Get either the latest GZDoom engine, or the latest Skulltag engine. The former is slightly newer and better optimized, the latter has much better multiplayer support and netcode. Get Stronghold from the official site.

Extract your engine of choice, Stronghold, and (it’ll be auto-found, but you can move it yourself if you want) DOOM2.WAD from the Steam install all into the same directory. Then either drag/drop strnghld_v1.pk3 onto your GZDoom/Skulltag.exe to launch it, or use the following command line: “gzdoom.exe -iwad doom2.wad -file strnghld_v1.pk3″. Replace GZDoom with Skulltag, if you chose that.

From there, it should all be fairly simple and self-explanatory. Set your renderer to OpenGL (Software won’t work), configure your controls, and jump right in. Be warned – ‘Not Too Rough’ difficulty is still a solid challenge after a few levels. Modern Doom mods have modern difficulty. There’s countless more interesting mods for classic games like this. If you’d like to hear more about them, or suggest something you’d like to see featured, make your voice heard in the comment box below. Good hunting, Marine.