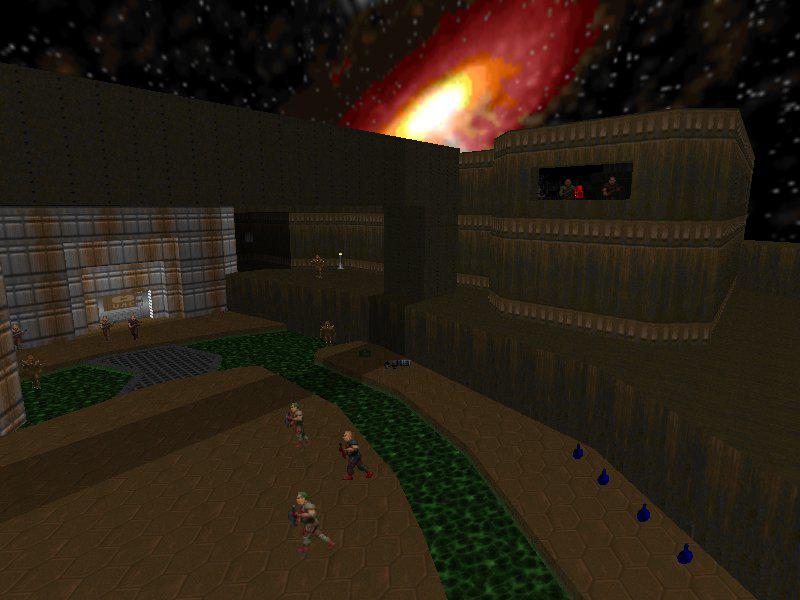 It was made by Ralphis and Rottking with an interesting design philosophy: Ralphis would make an area and send it to Rottking, who would make another area, send it back to Ralphis and etc. They dubbed it tag-team construction, according to the page on their website about it.

While I'm not much of a mapper myself, this approach is very interesting, and seems like it would help with a problem a lot of mappers have: mapper's block. They used this project to show a new way to approach level design. If you're stuck and not sure where to go with your map's design, send it to the other guy! Because every mapper has their own destinct style, I don't think this would be a great idea with more than two people (three might be pushing it), and passing a map between eight people might end up looking like a random mash-up.

Double-Impact, however, certainly does not look like a random mash-up. It has some good-looking design, a nice level of detail (which I never got caught on), and the texture usage is quite nice as well. I don't think I even saw a single (unintentional) misaligned texture. The theme for the maps was fairly consistent between areas, with a standard seeming to be kept for main areas, and different areas having different texture schemes, varying only as much as Doom 1, episode 1 did. The maps also remind the player quite a bit of Doom 1 areas. Whether it's a large, outdoor area with a blue armor pickup that you can't get to, or a zig-zagging bridge over nukage, a bit of this looks familiar. It isn't intended as a remix in the way Wonderful Doom was, I don't think, but it's just enough to evoke a bit of nostalgia.

The gameplay, as well, reminds of Doom 1. Most notably, I thought the gameplay throughout the wad was like E1M7, with hordes of zombies and imps, and long, twisting maps with a lot of secrets. It breaks away from episode 1 in that it has lost souls and cacodemons, but it's understandable if they didn't intend to emulate episode 1 entirely. In addition to crawling through the map, gunning down large amounts of monsters, it also features a good number of ambushes. These ambushes can be quite cruel, but if you're observant or quick, you can find a way to get around them or power through them, even on ultra-violence difficulty. If you stumble through the map blindly, however, you will likely be hurting.

The map layout was also quite good; I can't think of a point in which I was actually lost, aside from M3 (which I'll get onto later). Some maps are linear, but jump back and forth between areas in which you've already travelled. Some maps, however, are less linear. M3, for example, gives you two or three switches to press, but you can take them in different orders. Several other maps, as well, give you multiple ways of tackling an area, such as the path to the red key in M6. These can sometimes give you ways of sabotaging or blatantly neutering the aforementioned ambushes. Especially if you keep an eye out for secrets.

Speaking of which, the most important factor to me is the quality of the secret areas. Ralphis and Rottking certainly reward players for being observant and for exploring around, and seem to actually punish the player for not noticing things. A lot of the secrets were very easy to find with some helpful things, and some were just downright evil. They stay somewhat consistant in theme, however: If there's a locked door you can't open, there's a hidden switch nearby that opens it; if there's a wall that's discolored or had some odd alignment or a mismatched texture, it probably opens. A lot of areas you see from non-secret areas but can't get to are actual secrets, which I like quite a bit. Nothing makes the player explore the map more than seeing a soulsphere in a cage right at the start.

Unfortunately, it does have a few things that detract from it. The non-linearity and large size of M3 means you can get lost (seems to be a theme with E1M3 replacements), especially since one of the required paths is opened by an out-of-the-way switch that you can miss pretty easily. Some of the switches in that map, as well, are not particularly obvious in what they do, which can get frustrating when you have to look through the map again to find out what it did. Also, while I didn't have a huge problem with this, some of the ambushes almost require you to find a corresponding secret to be able to get through it. I'm not sure how you're intended to get through the red key ambush in M5 without a secret that has very little indication of its existance. Also, the gameplay in M8 seems to break the theme set by the previous maps, as well. I won't spoil it, but it goes from "explore this winding, twisting map!" to "Whoops, enjoy the massively-intimidating boss fight!" There's also a series of four secrets in the map that literally is useless, and another secret in that map is nearly impossible to find.

Overall, however, despite those minor gripes, I thoroughly enjoyed this wad! If they did one of these for episode 2, I would definitely play it.