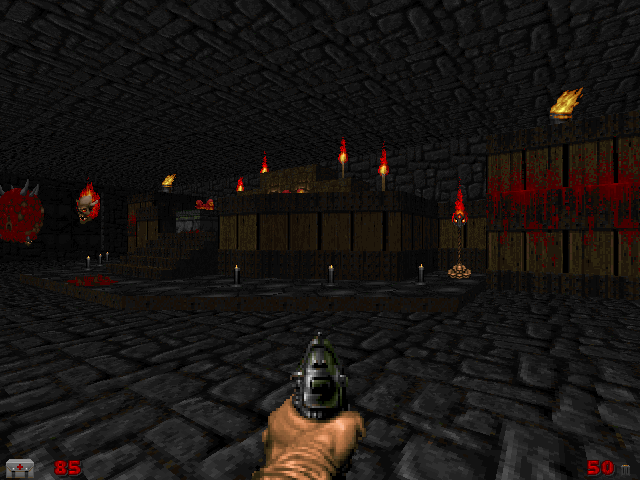 "The maps are overall small, and not too difficult by modern standards"

I'm sure we all have certain .wads that, while we have to admit they are not the greatest from an objective standpoint, still have a special place in our hearts.  For me, Hellrazor is one of those map sets.  Mapper John Diamond promises with this map set that it will provide "Six sick levels, designed for maximum disturbance of your conscience."  And perhaps that's what I like best about the wad: the attitude and vibe it was intended to exude, even if the implementation is sometimes rough around the edges.

The maps are overall small, and not too difficult by modern standards, although you can't waste too much health and ammo on UV.  The maps include no zombie enemies, this is stated as a conscious design choice.  This means you won't get sniped by hitscans, but you also can't nab any extra guns and ammo from dead enemies.  There are some devious tricks and traps, especially at the end, which are sometimes interesting, but as often neutral or outright bad.  There are a few "new" textures from Heretic and Hexen as well as a sinister red sky whose origin I don't recognize; unfortunately the new graphics have an ugly dithering effect in some cases.

MAP01: The Gateway
This is an atmospheric intro map, with less fighting and more of a focus on building tension.  The way to the exit is through a secret door, but since the space of the level is quite small, it's not as bad as it could be.  If you fall in the blood pit, you're screwed, there's no way out.  There's little to say about the combat, but it does set the mood for the maps to come.

MAP02: The Sentry.
Another short level, but the fighting ramps up in this one.  There's an overuse of 90-degree angles and some corpses are set blocking when they probably shouldn't be (for those using ports where that matters, this is a vanilla .wad after all.)  The end is potentially annoying, the "right" teleporter exits the map while the "wrong" ones send you back, but again, it's a small level so that's not as bad as it could be.

MAP03: Shrine of Sacrifice.
This level's got a nice evil church vibe going on in it, but also has the most prominent use of the badly dithered Heretic textures.  There's a dungeon with a small maze that isn't too overdone, and some neat places here and there for those who enjoy gruesome scenery.  One weird thing is that there's a door marked with the red key skull strips, but you don't need a key for it, in fact, there isn't even a red key in the map.  The blue key door, on the other hand, isn't marked as such.

MAP04: Four Agonies.
Out of all the levels, this is the most boringly designed.  It's a cross with four arms that have to be completed in a linear fashion, one unlocked which contains the first key, and then the rest locked and containing respective keys and the exit.  All four arms are nearly identical, with variations on the item and creature placement.  The same gruesome vibe seen in all the levels is present here, but it's still a boring map.

MAP05: Dark Fortress.
This is my favorite map of the set.  It's less plagued by 90-degree constraints than most of the levels, and has some neat scenery.  The map is a boss map of sorts, similar to those of The Ultimate Doom, but a bit more interesting.  You can, unfortunately, skim past the fight by hitting the switch and running, but in vanilla making the map differently really wasn't possible.  The fight is pretty easy due to infighting, but the "intro" to it is fairly cool.

MAP06: Hellspawn.
This is the biggest map of the set, and also the evillest in terms of being unfair to the player.  It has a neat area that looks to be a tribute to the area near the start of House of Pain, and a bit less reliance on 90-degree angles, but while this is one of the nicer looking maps of the set, the gameplay has some torturous elements: you have to run back and forth over some damaging lava (although a limited stock of health is provided nearby), finding the key requires backtracking after hitting a nondescript switch, and the way to finish the level is a real puzzler, made worse by the fact that if you screw up, chances are you're dead.  It could have been a cool level, as there are some nice parts in it, but in this case the flaws outweigh the good.

And there we have it: Hellrazor is a .wad with good intents, good ideas, and occasionally good implementation, but it's too flawed for me to recommend it.  A .wad that's special to me, personally?  Sure.  But you can find better.  It's just a pity that John Diamond didn't stick with mapping long enough to come out with something truly excellent; this is one of his very few releases.