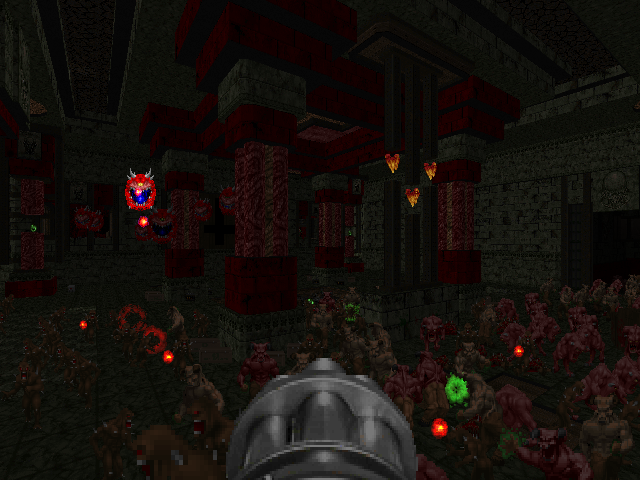 "There seems to be a general trend in (G)ZDoom modding..."

...where developing for the port needs to be justified in some way. This usually manifests itself in a few distinct ways. There are those mods which attempt to change Doom's gameplay in some way - creating a new set of weapons and/or enemies, altering the player's abilities, "total conversions" and the always-contraversial "randomizer" mods. Then there are those mods which will make heavy use of scripting - sometimes even for basic things like locked doors. Whether these elements enhance the mod or justify the use of (G)ZDoom is often debated, but it is ultimately a matter of opinion.

Titan 2, like its predecessor, falls into the rare third category - those .WADS which take many of the port's advanced features and blend them seamlessly into an experience which is still very much Doom at its core, rather than feeling "tacked-on".

What we have here is a 10-map (9 plus 1 secret) episode for Doom 2 and GZDoom with a distinct Hellish theme. The story picks up where the first episode left off, with the player waking up in a cell in a dark corner of the Hell dimension. The first thing that strikes you is the visual style - while heavily E3-inspired, all of the maps are highly detailed in such a way that gives real character and atmosphere. This is helped along by the truly evil-looking cubemap-based skyboxes which are reminiscent of those found in many custom Quake 3 levels. The next thing that strikes you is the difficulty. Even on HMP this .WAD throws you right in at the deep end and within seconds of starting has you taking on a group of Pinkys with the pistol once the single shotgun provided runs out. This might sound off-putting, but perseverance will reveal that ammo and health is actually in good supply throughout the game.

As you progress through MAP01, you will begin to see other interesting design touches. At certain, more frantic moments the music will change, and change back when that particular set-piece has been cleared. Then there's the use of 3D floors. This is Titan 2's visual party piece. While most GZDoom maps tend to have quite gratuitous use of 3D floors, Titan 2 utilises them in such a way that often you'll barely notice they're even there, such as the huge portcullis which marks the exit of MAP01 to the elaborate, yet completely cosmetic pillars in the main room of MAP07.

Use of custom monsters and weapons is equally restrained, and placement has been carefully crafted to maximize their gameplay potential. As stated before, this .WAD is tough, and leans towards the "slaughtermap" end of the scale, with some maps in the episode having monster counts in excess of 1000. However, it is also incredibly well balanced, and doesn't hit you with a new enemy or give you the new weapon (incidentally Skulltag's Minigun) until exactly the right moment. You may have encountered most of the custom enemies in Titan 2 before, but don't relax because, as with the original Titan, some have had their behaviour modified to make them more deadly.

Throw in some amazing boss battles and set-pieces which aren't necessarily as tough as they are daunting and an ingenious secret level and you have a very polished piece of mapmaking which shows just what GZDoom is capable of in the right hands.