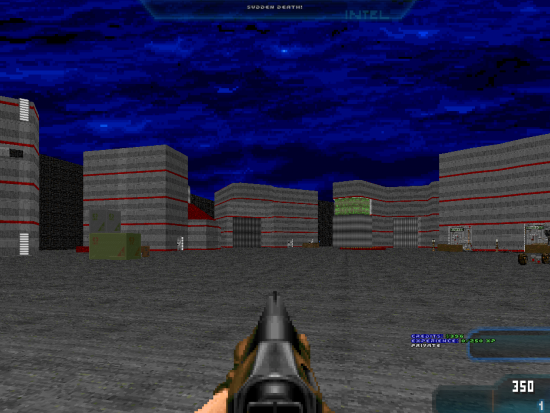 All Out War 2 by Various

Considering AOW has been around for ages and has already been reviewed, possibly more than once, in the past, why would it be reviewed again? The answer is simply this: Deal with it. Long story short there was actually a debate about why AOW was "bad" and no one was actually able to defend the position of why AOW wasn't that good, other than saying “it isn’t Doom”. Has AOW really improved since the days when its name was synonymous with failure? Well that's what this review will explore (without being outrageously biased and just a rant).

First off, we'll explore the graphics, sounds, effects, music, and generally how AOW looks. Music can be written off right now, AOW is inspired by C&C....90% of the pack's music is from C&C. Go figure. The music quality was lowered to save memory space (the wad is huge and you need to download 2 of them), would a separate music pack be a good idea? Maybe.
The sounds...oh the sounds. The sounds make me want to turn the sound off, leaving just the music playing. They're a real mixed bag, for the most part nothing really seems to fit. Combine that with the fact that usually there are many people playing and you get constant, well, noise. There's no other way to put it, the sounds are kind of annoying. The announcer voice is somehow not all that annoying though, except when you have a bunch of things going on at the same time, but that's to be expected.

The sprites are also a mixed bag. There are sprites from almost everywhere. Nothing seems really "new" and what is new is usually a model rip. Now if there's one rule of thumb to making any kind of mod is that if you must use model rips they should at least be indistinguishable from the other sprites. It just doesn't look good.

Last but not least the maps. Not how they play but how they look. AOW has been bashed on many times for the poor detail quality of its maps. Has this changed at all? Kind of, actually. The maps are a mixed bag too, just like everything else.

The first thing you see upon entering an AOW map is the starting room, for about half of the maps these rooms consist of a couple different textures used over a very large room with yellow text above about 50 terminals. The text is more engaging and pleasant to look at than the texturing.

Is this true for all the maps? Surprisingly not. The remaining maps (most of the late maps in the pack) actually look pretty interesting. There's only about 3 or 4 different starting room variants but at least the other remaining 2-3 aren't eyesores.

The next thing you'll see is the rest of the map. All of the maps suffer from a blandness problem however. This can be blamed on the size of the map usually, an AOW map is pretty big, that makes it harder to detail and with the 100 different things going on at once, possibly more lag. Usually if the starting room and base aren’t good looking, the rest is surely downhill. In most cases the base is the best looking place in the map. This is bad considering that for 20 different maps there's only 3-4 different types of base themes so it boils down to copy/paste for about 16 of them. With this logic some maps really have no excuse for repetitive texturing and general blandness.

It's not all bad though, some of the more gimmicky maps actually look pretty nice. Maybe the gimmicks detract from some of the looks, in the case of the 8-bit map...it's hard to screw up an 8-bit map when it comes to detailing. Generally speaking, there's a couple really good looking maps, a bunch of maps that fall right down the middle, and then there's the horrid, bland, plain maps that everyone refers to when they talk about AOW. I wonder if people know that the good looking maps even exist, they are pretty well obscured behind the not-so-pretty maps. This is due to the fact that the map pack was originally made by Fletto, and this is a bad thing. There is a clear difference from his maps (which are the source of ridicule and set the general attitude of the mod) and the ones made by more skilled mappers.

Onto the gameplay! How many twists, turns, and loop-de-loops has this mod taken in a crazy attempt to make a balanced game play? TONS. Has it been improved? Yes, it has. But there are still many issues that should be examined. Let’s begin with the basics.

The mod is run by “classes”, and with these classes comes a variety of attributes, ranging from varied resistances, weapons and speeds. The goal is to destroy the opponent’s base, which knocks out various classes and abilities. Without taking a purely negative perspective, this is a cool concept. It should also make the classes easier to balance, theoretically. However, this balance system is fucked up by a ranking system that is also added, which adds armour and health to the player who ranked up. Separately, these balance systems would be quite effective, but because players are different classes AND ranks, they become tanks, and the worst players can take out the best simply because they do not die. Ever.

So how does one rank up? Well, there is harvesting crystals for cash and exp, or killing people. Frags net you 50 exp per kill, but sometimes this is hard. The weaponry causes a lot of suicides for no reason. For example, if you poison someone with a tib rifle shot and they die due to the poison burn rather than a direct shot, you are cheated out of a) a kill count b) cash and c) exp. So there is an alternative to fragging, harvesting. Word on the block has it that it takes 30 minutes of harvesting to get the top rank. I don’t know about you guys, but that is a fucking ridiculous amount of time to spend running back and forth a short distance that is lengthened by the unholy slowness of the harvester class. This brings me to class speeds. Speeds. ARGH. Speed is the defining feature of Doom for me personally; every other game just feels so fucking slow compared to Doom. The classes in AOW are all slower than Doom speed, and this is just awful. As previously mentioned, the maps are huge, and if you pick a class like Chem Warrior, it will take an unreasonable amount of time to walk across the map, even with sr40, while at the same time keeping you vulnerable to the gauntlet of mechs, auto-turrets, snipers and god knows what else. If by some miracle you make it to the other base, you have to deal with insane defences and an Obelisk of Light (a structure that automatically targets and shoots a powerful shot at enemies). Combined lack of speed and out of control defences bring the game speed to a complete halt. If you think MAP02 from IDL is grindy, try playing 1 single AOW game on any map and getting nowhere because of simple speed problems. A teleportation device via utility gun was added, which is great, but in all fairness, there needs to be more speed.

Mechs are probably the defining feature of AOW that keeps bringing people back. So how do they play? Well, there are half a dozen mechs to choose from, all with different purposes. They too are slow, some slower than others. I don’t understand how people with mechs survive for so long, as it seems whenever I get a mech I die within a couple minutes. As for power, well I guess if you use them right they can be pretty tank. The flying Orca is grotesquely overpowered and always has been, because one little touch and instant death is imminent.

The maps are another thing that have to be examined for game play as well, as usually the dynamic of the game is directed by the map. A lot of the debate of why AOW is bad is because people just point at spamming. This is pretty true, but I think this spamming problem is a result of the combination of everything already said, particularly the speed. It gets to the point where it’s easier to get up on a hill and say “Aww fuck this, I’m just guna hold fire until something dies”, rather than taking a year to get to the other side, only to trip on a proximity mine which gets replaced almost immediately and then repeat process until someone gets bored, lazy, or distracted. The maps take so long to cross, and seem to take longer because of the lack of detail and the crazy amount of flatness in them. Smaller maps always prove to be the better ones in terms of play.

Classes. There are so many to choose from! You have to pay for each class, but money rolls in pretty well so its not that big of a deal. Each class, as mentioned, features a balance with armours and speeds; but these are totally defeated by the ranking system (which adds health and armour) and weapon drops. I mean, you can pick any class you want, but likely you can just pick up that weapon along the way. What’s the point to having a special class if you can just pick up the weapon elsewhere? Certain classes don’t drop weapons, like the SSG, or stealth laser, so why can’t weapon drops just be removed? It would help balance things, a lot. Maybe instead of a ranking system, make certain classes (ie the slower ones) have more health, so the armours can be better balanced? There are ways to balance out this shit.

In all fairness, there is the possibility of having fun in this mod. Holy fuck! Yeah that’s right, it’s possible, once you get over the shitty definition everyone has given it. "ARGH IT’S NOT DOOM!" is not really an argument to say it’s bad. Your argumentative skills need improvement if you can’t come up with any informed accusations. If you start off on the right foot, have good aim, play on a decent map, you can get some kills (though this is a lot of criteria required to meet just to have a bit of fun, compared to some other Doom mods where you can just join and have a blast at any moment), blow up some buildings and have some decent firefights once in a while before all the defences go up and things grind to a halt. Getting a team of mechs together to bust through said defences is somewhat fun. Play with your friends, not alone. AOW gets a bad rap for game play with some truth to it, but there is the potential for it to be much better.