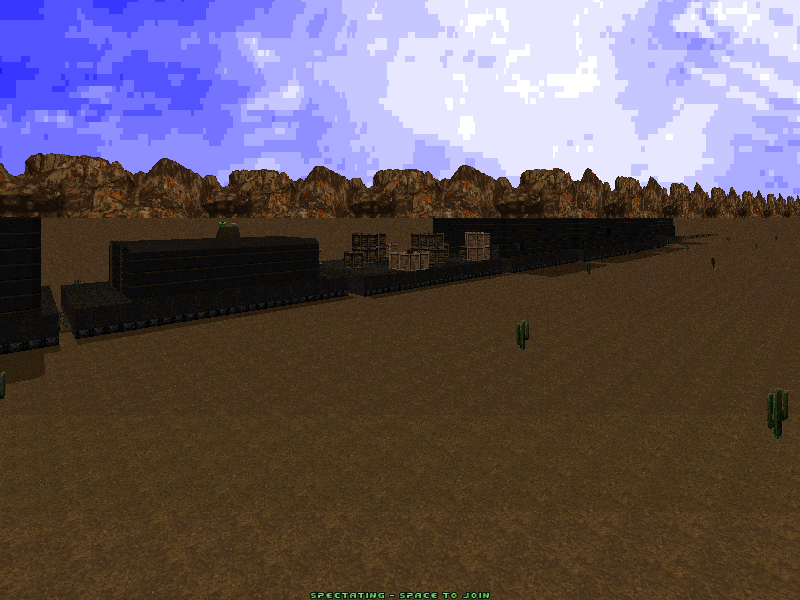 "Here is a classic. I know what you might think; Stalin, this isn't new!"

We want fresh material! Well, granted, but I chose to review Dynamite DM because I think it's a great pack that has been a little buried. Everytime somebody says let us play DM or TDM it's always UDM something. While the UDM series is great, I rarely ever hear someone say "Let's play some Mega5/Sabbat Martyr/Dynamite!", and I think some different wads should be so associated with DM.

Dynamite is a compilation of maps, ranging from industrial to western. This pack is absolutely fantastic, despite having some sketchy looks at times and some skimping out on SSGs. The first time I experienced this wad was Friday Night Fragfest. It got me hooked on this wad ever since.

Despite only having 13 maps, this wad is highly replayable. Opening up with Gencore II, you play an absolutely furious map. It looks good and plays awesome. The maps can be insanely fast paced (see MAP03 Cookie Monster; this map would probably make a fantastic duel map) or slightly slower and strategic (MAP11: Crates on a Train). MAP02: Ruckus is really atmospheric, especially in a 2 v 2 tdm, a western with appropriate ambient sounds and a sweet Silent Hill midi playing creates a true stand-off feeling map.

One thing I really like about this wad is the use of skulltag items without them really breaking the balance. Grenade launchers often created lopsided TDM games if one team has it, but the maps allow for the launcher to be checked properly. Ruins and guardspheres also are seemingly properly managed, whether by being in difficult to reach places, or placed in areas of high action. Dynamite uses sound replacements for the guns that fit in perfectly without sounding too annoying. The plasma rifle sound did not change however. There is a lack of bfgs in the maps, although I find this appropriate. Others don’t think so, but its personal taste. This wad features one new weapon, the Vaporal Blade, that appears in a couple maps. It’s a mean glowing sword that butchers the hell out of anyone standing in your way.

Gameplay wise, there is rarely an issue. Finding a weapon is never hard, although on some maps, such as Ruckus, SSG's are a little more rare. Finding ammo is not hard, and well spaced out. Usually one dies before running out of ammo, and if in the rare event you do run out, finding a couple shells is easy enough. Finding health can be tricky in some maps, requiring actual knowledge of where the health is to use it right. This isn't necessarily a bad thing though; it prevents people from never dying. There is one issue that sort of sticks out. The map size; most of the maps are not built for 1-4 people, ESPECIALLY if they camp, holy shit. You might get lost in some maps, such as Urban Decay or Villa, because of maze-like quality of them.  However, with lots of people, the action never stops. Ever. I can’t think of a bad map in this bad other than the joke map.