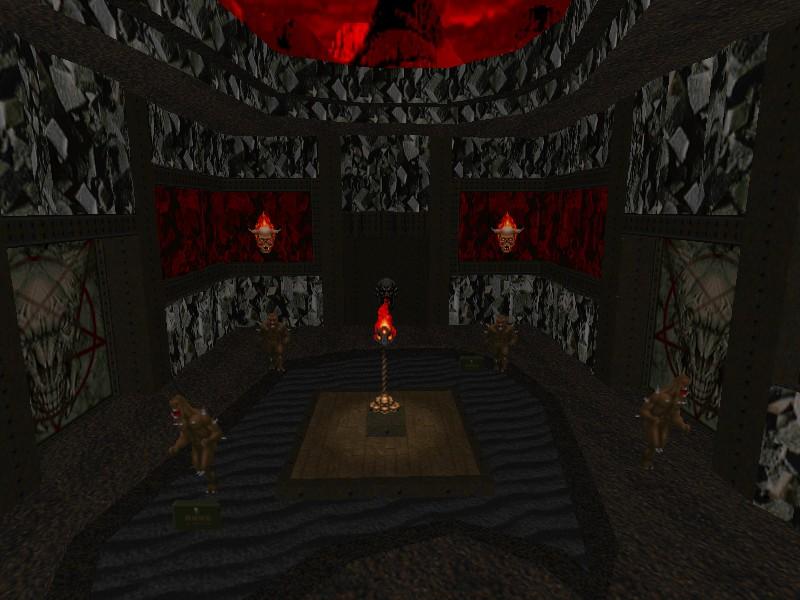 Ultimate Simplicity is what it says: SIMPLE! It's a two-episode (three, counting the director's cut) wad featuring 30 short, sweet, action-packed maps. The design philosophy is very simple: Make a nice looking map in a short amount of time that will take as small an amount of time to play through. In that spirit, this review will be as simple.

In gameplay, it's exactly what it says: simple. The maps are small, and you don't scratch your head wondering where to go. It's makes a point of being linear, but there is backtracking. In detail, it's just as good; there is decent structure to it, and mostly on ceilings and some floor and wall detail that you wouldn't get caught on. Texture choice was excellent as well.

Monster placement was also nice. Challenging, but I didn't feel at any point it was overtly unfair. Some traps were pretty bad, though (Two Cyberdemons in a courtyard, but you are given a BFG). A few director's cut maps weren't as well balanced.

Now for the unfortunate bit. The maps are sometimes TOO linear. That is to be expected, since that's what is advertised; there is only ever one way through a map because it's trying to be that simple. Also there are VERY PAINFULLY few secrets in the entire series. The secrets I do remember didn't have much indication of their existance, so they were murder to find. These are side effects of its purpose: It's simple! If you want more complex gameplay, play another wad!

As an aside, this should also be considered a review of the original 20-map Simplicity of which Ultimate Simplicity is an overhaul. The first six maps are replaced (but the original maps are in the director's cut, so you aren't missing anything), there are some tweaks to the rest of the maps, improved multiplayer-compatibility, and there's a new intermission sequence and heads-up display, as well. Ultimate Simplicity also adds Hudmessages at the start of each map with a small comment from the author, and it seems AgentSpork has a low opinion of his mapping ability.

If this wasn't simple enough, I have a quote from a ZDoom contributer: "Um, I liked it. It had things to shoot so I shot them."