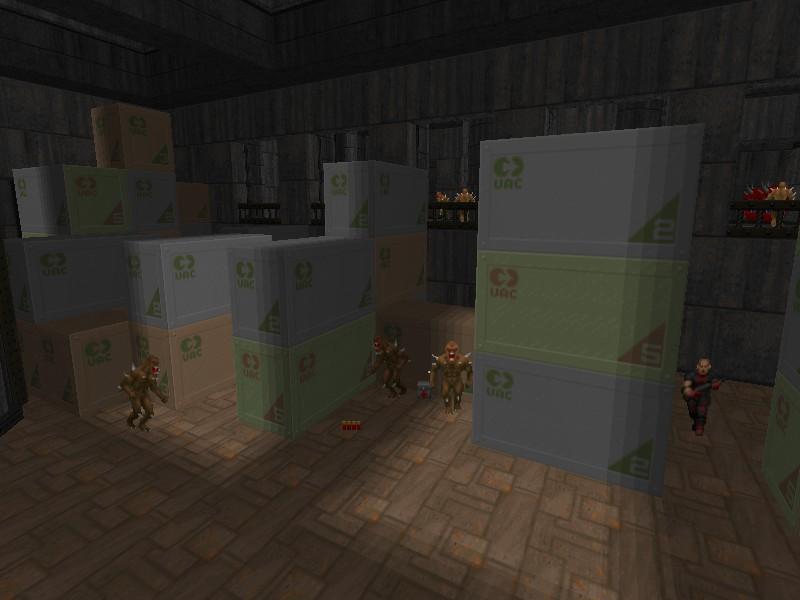 Vanguard is a 12 (13, but the 13th is a joke, according to the readme) map, Boom-compatible set by the popular author Skillsaw. From my point of view, Skillsaw came out of nowhere and made some of the best maps in Stronghold, so when I noticed on DoomWorld that he released this, I had to take a look. I haven't had the time to play through all of it, but I got through the first few maps and tried out one in the middle and one at the end. So this is more a first-impressions review than anything else. Vanguard itself was intended to be a 32-map speed-mapping wad inspired by Speed of Doom, but for whatever reason that isn't stated in the readme, it was instead released as only 12 maps.

To anyone who has seen Plutonia or Plutonia 2 (which is basically any Doomer), the aesthetic style looks very familiar; vine-covered stone bricks, wood and caverns aplenty. Later on, it goes into a techbase style very reminiscent of Simplicity, then Scythe 2-style Hell maps. There's a comfortable level of detail. Nothing that looks noisey or blocks you as you're trying to dodge, and looks up to the level of the aforementioned Scythe 2 and Simplicity. In layout, the maps are quite good as well. It sometimes gets a little confusing at first glance, but it's easy to figure out after that, and some maps are quite simple. Some of the secrets are a bit too hard to find, on occasion and several maps don't have any secrets at all, which is a shame since there's room for quite a few helpful bonuses, both in the layout, and in the gameplay.

Right from the first map, this wad is action-packed. Not in a way that allows you to move slowly and plan it out beforehand like Double-Impact, but the kind of action that requires you to think on your feet or get surrounded and clawed to death. That said, the difficulty in those situations isn't particularly horrible. Sometimes, it seems downright intimidating (Map07), but quick reflexes and a good game sense will get you through it. Skillsaw also seems to like Archviles. A lot. That said, he uses them well, and not in any way that's unfair. One negative thing I have to say, though, is that it's not kind on pistol-starters. It's possible, but incredibly difficult.

Unfortunately, the later maps seem to follow the path of some of the more popular megawads. It goes from "monsters-used-well" to "massive hordes of monsters in wide areas." The style of "difficulty" we see in Scythe 2's last few maps. To put it in perspective, Map12 starts you out being chased by 20 Revenants, several Imps and an Archvile, and later on has you dodging dozens of Hell Knights, Mancubi, Imps and etc., while running around on lava. I'm assuming anyone who is reading this has seen me play, either on Skulltag multiplayer or through my videos, so when I say I can't think of any way to beat the last map without infinite lives or cheating, I hope you understand. I don't particularly like this style of gameplay, but a lot of people do, which is what made Hell Revealed and Scythe so popular (and he even states in the readme that it's inspired by Scythe 2 and Alien Vendetta, so there is clear warning). Up until this point, however, I thought the gameplay was very nicely balanced and the right kind of difficulty.

Overall, excellent detail, nice design, action-packed maps. Flows pretty nicely, unless you get surrounded by monsters. The difficulty is very nicely balanced until the last map or two in which case you had better know how to deal with dozens of tougher monsters. If you like the gameplay style of Alien Vendetta, Scythe 2 and the like, you'll enjoy this.