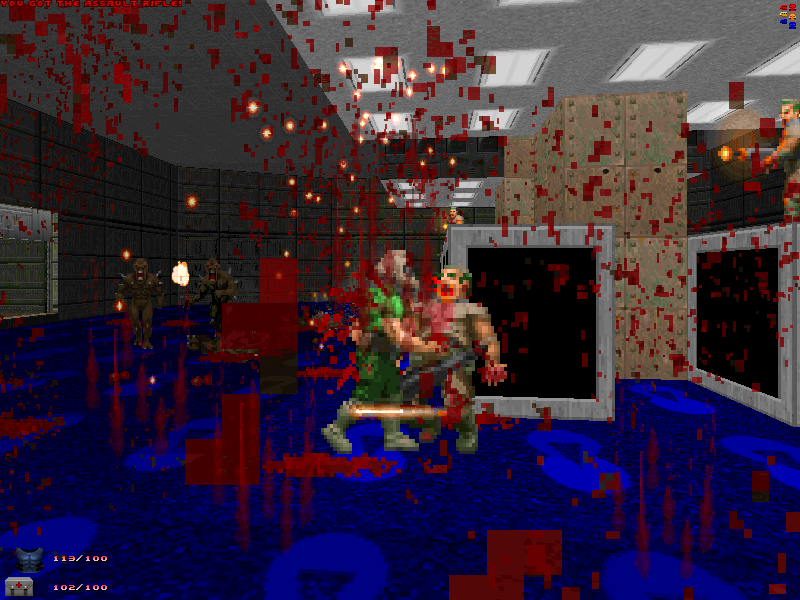 When I first heard about "Brutal Doom" being a blood and gore mod, I expected a lot of Nashgore and gimmicky deaths involving lots more Nashgore. What I got was incredibly made, with just small amounts of Nashgore here and there.

Let's start with the weapons: Nearly everything has an altfire/reload sequence. As opposed to the pistol, you start with what appears to be an assault rifle, with the difference that it's a single shot, and the altfire takes it into an ironsight mode where picking up headshots becomes a bit easier. The Shotgun and SSG don't fare many changes, the only thing changed in those being that the SSG gets an altfire that allows it to fire one barrel at a time.

The Chaingun's altfire allows you to spin it up, so you can start plugging whatever the hell you want as soon as you see it. There are graphic changes to the Chaingun, the Rocket Launcher, and the Plasma Rifle, but there aren't many gameplay changes in these weapons. The BFG9000, however, changes from tracers to splash damage-- so I would NOT fire this thing at close range.

The Imp Fireballs get some nice graphic additions, along with most projectile shots, but what really makes this mod shine is the ability to perform bloody fatalities upon the monsters that stumble across your path. Yes, you read that right-- fucking fatalities. All you have to do is pick up a berserk pack and start throwing punches-- you can easily pick up a poor monster and tear it to bloody pieces, and sigh in pleasure after the deed is done.

Another oint that makes this mod a must play is the sheer amount of blood and gore you can get out of this. Did I mention that a close range shot from an SSG against a low level monster will likely dismember the hell out of it? Yeah, you can blow your enemies limbs off with practically any weapon now, and the sheer amount of blood and gore makes this mod INCREDIBLY satisfying. Put it simply-- this game was rated M when it first came out. If it would have had Brutal Doom's amount of interactivity, it would have likely been made AO.