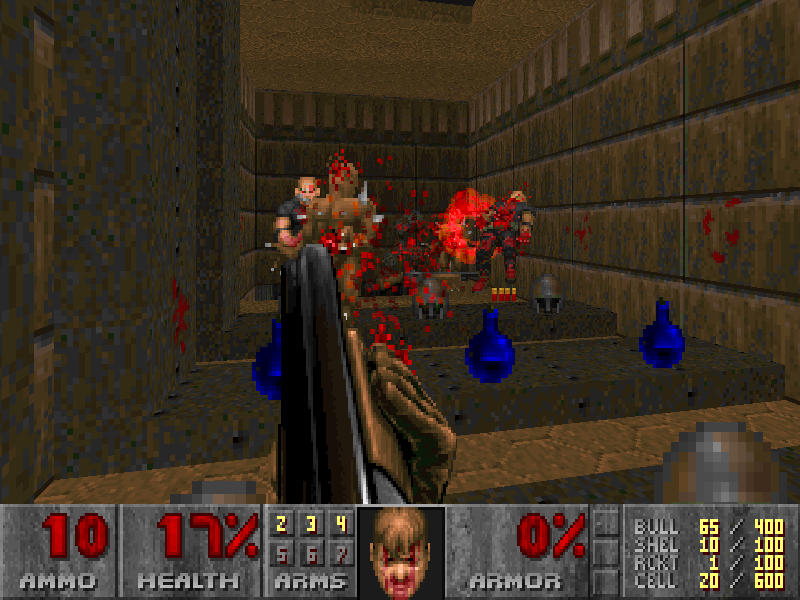 One of the most common (I believe, at least) self-imposed-challenges on mappers is keeping the action within a set border. This allows them to focus on flow and detail, and not try to make something overly sprawling. Excellent examples of this are Claustrophobia 1024, Congestion 1024, and Claustrophobia: The Walls Close In (even though that one has significantly larger map sizes than 1024/1024). It's not too bad an idea. The problem, however, is one tinged with irony--sometimes there's just too little space to move. Fending off Barons, Archviles, Pain Elementals, and so forth becomes infinitely more frustrating than it already is when you just can't maneuver around their projectiles. Then you add Revenants and their homing missiles into the mix...

Anyway. Confinement is a map that follows the same ideas of Claustrophobia/Congestion, but on an even smaller scale. Instead of 1024/1024 units, the maps are half that size. Care to guess what size? (hint: It's close to 513/513)
Maps are bite-size and there's only seven in the pack total, meaning that the total playtime of this mod is somewhere around ten to fifteen minutes. In fact, by the time you reach this sentence, you probably could have just downloaded and beaten it already.

So, what's actually in the maps? Well, that's an interesting thing to ask, really. Half the point about the 1024 or so limits in Claustrophobia/Congestion is to help focus on detail and gameplay, helping the maps feel like something bigger instead of how tiny they actually are. Contrast Confinement's design, which puts you in a big blocky box with big blocky walkways and...well, that's pretty much it. Run back and forth a couple times, hit a couple switches, dash out and move on to the next. It's simple in idea and simple in execution, and there's not many flaws that can bring it down.

What flaws exist, though, come tinged with irony. Let me give an example. In Map05, you are constantly running back and forth in one single room with cramped hallways, trying to fend off at least five Revenants, two Archviles, several Barons of Hell, and are getting loaded with a Rocket Launcher and rocket ammo. In, I repeat, one single room with cramped hallways. There is a slight problem in conceptualization here. When you're stuffed in the same room with a pile of the big-bruiser enemies that can take you out in a couple shots and have very little area to move, things quickly get frustrating. There's only so many times you can sneak around a corner ever-so-carefully only to get blasted with three rockets before it becomes tiring. Thankfully, the bite-size nature of the maps work in its favor here--no matter how many times you die, you're only a couple seconds away from getting right back to where you were. There's never a sense of lost progress, and deaths are barely much of a setback at all.

Does that justify the far-too-cramped feel, though? Well, yes and no. This map set is set right in the middle of the road of quality: There's the lack of interesting design, the powerhouse enemies in cramped corridors, and the frequent running back and forth...all of which have their edge seriously dulled by the sizes of the maps in question. The lack of interesting design isn't as much of a problem when you're in a map for about five minutes, the powerhouse enemies killing you because you can't move isn't as much of a problem when you can get back again in a minute, and the running back and forth isn't any real deal when it takes only about ten seconds to cross the map. It's that size that really renders it worth a download, even if it's not a memorable work of polish that'll be played again and again. Laying in at about ten minutes worth of playtime, it's simple and inoffensive--if you don't like it then you'll be finished with it quickly, and if you like it then it was a good ten minutes.