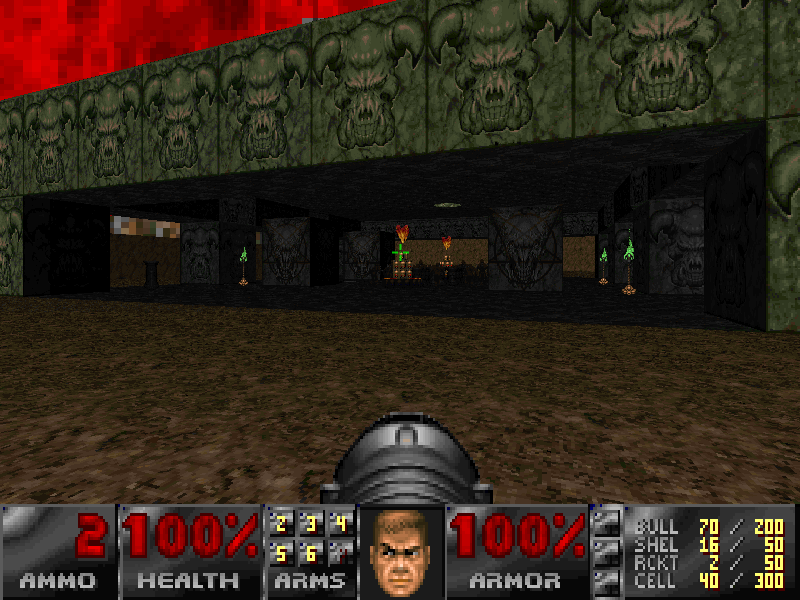 The last Revenger by Oleg Puchkov

"Here's a little bit of something from the past."

Time is a strange thing. It can really just slip out of hand--before you know it, months have passed, years have passed, and that project you swore you'd finish is still laying in your harddrive, celebrating its tenth anniversary. The Cacowards have its own Mordeth Award in order to celebrate this. Sometimes, however, you need a mod like this in order just to appreciate how long time goes on. According to the readme, it started development in early 1997. It finished at around 1999--but it's "final release" was in 2006, and it was only just recently uploaded onto /idgames half a month ago, in mid-2011. Time REALLY goes by.

So, enough about that. What've we got on our platter today? Let's jump into our time machine and see how Doom was in the paaaaaaaast! The last Revenger, missing a capital L for some reason, is a megawad consisting of the usual trappings of a megawad back in the day. Lots of new graphics, new sounds, some new music, and a whole bunch of maps. The graphics are pretty standard fare for the time--you've got a couple interesting switch sprites, some new corpse types strewn about as decorations, and new menu graphics done entirely in Russian. The sounds are what will take the most recognition, though, primarily due to their corniness--the fireballs fly through the air with a voice-acted hiss, impact with a pitched-down someone saying boomph, a lot of the enemies have Russian voice acting, the shotgun for some reason has a clang after it fires. Nice, if not unintentionally funny. What about the maps, though? Ah. Here's where things falter.

Let's talk about what you'll first experience. In the first map, the Prison, you find yourself in the world's least secure cell locked by a blue keycard just within reach out a little hole. Upon exiting, you find that the lit sectors are damaging to you. Later on, you find a Radiation Suit AFTER trekking across a short expanse of slime. Later on, you find a blue-key switch that seems to do absolutely nothing except make the window shutters slide up and down. There are multiple berserks, multiple keycards, teleporters that trap you in rooms without escape, elevators that trap you in rooms without escape, and it is all around a pain to constantly be running back and forth. When talking about first impressions, this falls flat right away.

But, well, that's just the first map. What about the others? Unfortunately, this is a precedent that continues throughout the entire megawad. The maps are very large and at times feature some very interesting architecture, especially for the time it was developed, but unfortunately all of them have come at a sacrifice--interesting gameplay. Areas are usually incredibly dark, switch hunts are frustratingly common (and sometimes timed), and oftentimes you need to do find secret switches/false walls in order to progress. Some interesting-looking areas can only go so far before you just want to shoot something, and eventually they end up just being irritating as you backtrack through them again...and again...and again...and again...

That being said, it's not entirely without an audience. For those that simply want to shoot, shoot, shoot, shoot some more, shoot the walls, shoot the corpses, shoot the signs, and then shoot the ammo just for extra shooting, this map is more than definitely a pass. For those with a sort of extremely masochistic oldschool Metroid-style itch, however, this may be interesting. While it's sincerely doubtful that this will end up on their top favorite lists, it's refreshing to see an approach to Doom other than just shooting over and over...even if that approach ends up flopping straight on its face.