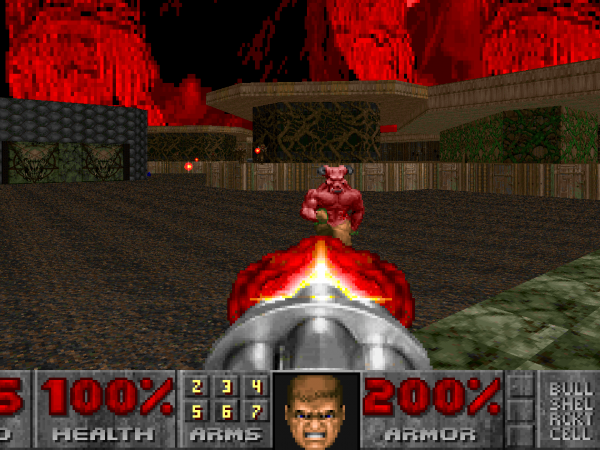 "In fact, they're [the maps] nicely detailed in a sort of 'modern, yet old' style."

With Knee-Deep in ZDoom looking over its shoulder to any competitors for the classic The Ultimate Doom episodes, this wad is the underdog that would’ve won if given the chance. However, according to the author, the maps were a rival for Mood or Randoom. At least it stayed within its own league.  Wonderful Doom (Or simply; wd12.wad) is the wad that emulates the old vanilla Ultimate Doom episodes, from Episode 1 to Episode 4 by a fellow named Wraith. Its style of emulation, though, is enough to even make a few die hard fans pause in their tracks. Trying to figure out which direction one should go.

This however, isn't to say that the maps are bad or under detailed. In fact, they're nicely detailed in a sort of 'modern, yet old' style. The maps are close to the size (or in fact, almost near replicas) of the original maps. Either with added additions or rooms, or completely reversed and inverted. Remember where you got that blue key? How about that BFG? It's not in the same place! You might find a handful of cacodemons... that however, is the downfall.

The maps feel almost barren at times. I find my self running around the map enjoying it for the detail that has been put in rather than blowing away imps and zombiemen with my trusty shotgun. The maps could go for more additional monsters. The item layout is roughly the same with the vanilla maps. Save for getting weapons either earlier or later by a level or two -- which means a lot for maps which has a 9-episode limit!

The gameplay is that of a easy Doom level. With enough nostalgia thrown into the mix to make a veteran squee with memories. Though, again, the lack of monsters makes it feel as if I was playing on 'Hey! Not Too Rough!'. However, I must keep reminding my self that this isn't designed for modern source ports, no no, this sucker runs on the original doom.exe! A wad, made in 2009.. RUNNING under doom.exe! I'm shocked! Are you? What's the rarity of such a thing? I've lost count!

The run down though is, if you're looking for a fun 36-count map for Ultimate Doom that feels like the classic maps which you have grown to love or hate. Play this on the source port of your choice. Hey! You could even do some with cooperative! Look no further than this hidden gem in /idgames! I'm sure it'll give you a run for your memory!