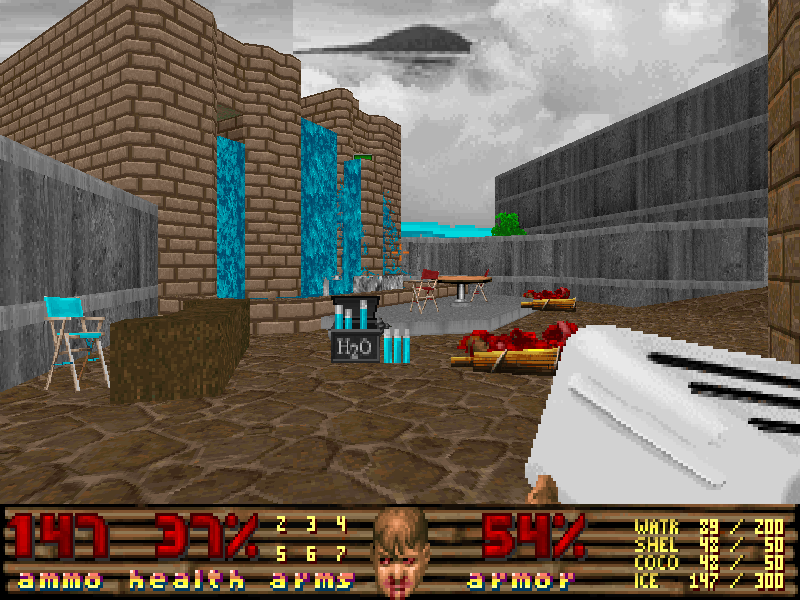 "I've got something to confess. I love FPSes, but I have never once touched Duke Nukem in my entire life."

Sure, everyone in the industry is familiar with the square-jawed cigar-chompin' pastiche, but I never actually touched his games--I was more familiar with him through osmosis than anything else. So, when DooM Vacation came out, a recreation of one of Duke Nukem's "Life's a Beach" mission pack, I promptly jumped at the chance to become familiar with him.

As mentioned before, DooM Vacation is a recreation of Duke Nukem: Life's a Beach, notable in that it's set in a Caribbean vacation resort instead of the usual FPS haunts. Whether it's an accurate recreation or spiritual conversion or just an "in name only" thing I can't possibly tell, but to be frank with a level set this fun I'm not entirely sure it matters. There are three maps total, and players will run the gauntlet from a hotel to a market to an amusement part.  These maps are pretty large and fairly roam-y--there's plenty of areas to run around and explore before moving on for the next card, and sometimes there's multiple ways to get to a new area. Unfortunately, sometimes this works against it, as it's not always obvious where to go next. Thankfully, it's rarely at the point where you have to wander around the entire map, pushing Use against every wall.

That aside, going through the maps is generally a treat. The fact that the maps follow a Caribbean theme is pretty obvious right from the get-go, but it's the little touches that really drive it all home--there's a new palette full of bright and vibrant colors, the keys are replaced with Mastercard/Visa/American Express, every weapon has a sort of appropriate thematic counterpart, and the monsters are positioned like almost every encounter was a rude interruption. My personal favorite part, though, are the pools that lead to underwater segments, which are actually warps to different sections of the map. A clever, clever way to simulate 3D floors. None of them are chock full of detail, but they don't need to be. Every map looks decisively different from the others, all of them look good anyway, and there's plenty of interesting points that will stay in mind long after it's finished. At one point in Map03, for example, there's an unfortuntely all-too-brief water-slide that jettisons you along, throwing you through twists and turns before throwing you off the end of the slide.

But enough gushing. It's impossible to make a perfect wad, of course, and every vacation has some chances of sunburns. What sort of problems are there, tripping up this trip to the Caribbeans? Well, the map set is quite difficult. I'm certainly not against difficulty, and I'm not against wads that cater to Doom Gods that've been playing on Ultra-Violence since day one, but sometimes there's just a lot of dirty tricks that spoil an otherwise fun romp. The sheer amount of Chaingunners and Sergeants just around corners often make things far too uncomfortable, and at one point early in Map01 you're thrown up against a Cyberdemon with very little ammo, health, and armor. Running from him isn't too hot of an option, either, 'cause he can shoot through windows anyway.

Another major point of contention is the women. While I'm lead to understand that hot babes are the cornerstone of every Duke Nukem game, here they come across as a frustrating annoyance. They follow you a confused Imp looking for a second-night stand, crowd around you, block your vision, and they have a total of three voice clips that they repeat every two seconds. While they ARE killable (you monster), it takes too many shots and they don't have any death frames--they just vanish. Oh, yeah, and the weapons generally don't always look too hot, and there's only one Backpack through the thing and it isn't in an obvious place, but at this point I'm just picking at nits.

The point is, DooM Vacation is fun. Despite its flaws, it's a blast to play through, it's an interesting setting for maps, and there's nothing so surreal as taking out a bevy of zombies with a squirtgun. It's a lighthearted and silly romp that nicely balances out all of the armageddon-type wads that people have been releasing lately, and is a worthy addition to any Doomer's collection.