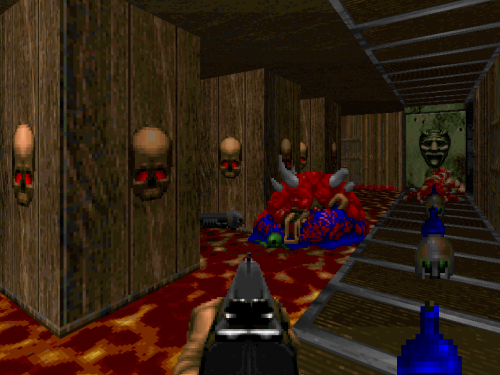 In many different ways this wad is very true to the original iwad for which its design is inspired by. The name itself is a bit of a misnomer. It leads you to believe that the map pack is really underdetailed and not very pleasing to look at, and in many maps this is simply not true. It seems that there's just enough detail in this map pack considering what its goal is, which is to bring forward a set of maps that are designed to give the player a good time and a feeling of nostalgia. Even then there's plenty of areas with interesting and varied architecture. In addition, the texturing is also varied and you won't feel like you're looking at the same thing for too long. It's true that more detail could be added, but there's just enough so that overall blandness is avoided.

Despite the fact that the architecture is interesting and the texturing is not bland, some themes are repeated just a bit too often, for example the Slough of Traps motif is seen numerous times in episode 3.

Speaking of motifs, the real kicker to the nostalgia factor in this pack is not just the texturing and style, but also some landmarks that are present in almost every map. Most map packs that attempt to emulate the original style end up using the landmarks of the map that they're emulating in the map itself. This leads to a lot of E1M1's that look almost exactly alike, along with every other "classic" map. The interesting thing here is that while the old landmarks and familiar architecture are present in the maps, they're spread around the whole pack. So yes, there are the usual Doom 1 landmarks that every player has come across, but instead the player will come across an area resembling something from the Doom 1's episode 3 all the way in episode one, and vice versa. That doesn't mean you won't see E2M1 architecture in E2M1, but for the most part the scattering of the landmarks throughout the episodes allows for more flexibility in the level design without sacrificing the nostalgia appeal.

The maps themselves all had their own distinct layouts and design, and the more scattered usage of the landmarks present in the original Doom lead to the maps not being defined by the landmarks used, but by their own layout and architecture. Despite being themed to represent the original episodes, this map pack manages to still be original and the player will not walk into any of the maps and know what to expect.

The gameplay in this pack is also exceptional. The player is always engaging with various monsters and there will rarely be a quiet moment (as long as the player keeps moving forward of course). There's just enough ammo and health to get by each battle, and with a bit of monster infighting work it's not hard to have a bunch left over. There are a couple issues with the monster and item placement, however.

More specifically, the traps become rather predictable after a few levels. They're always used in the same way, and even though the player is always shooting at something, the lack of the element of surprise that keeps players on their toes is missing. Item placement is sometimes too dependent on finding secrets tool. There are times when all the weapons the player needs to progress are hidden in some secret nearby. Though they're not too hard to find, the fact that necessary weaponry is hidden away offf to the side is a bit of a problem. Eventually the player will come across all the weapons present in the episode, but ammo is placed as if the player is expected to have found whatever secret containing the additional weapon.

The layout is designed so the player doesn't spend much time backtracking. Backtracking is a problem present in even some of the best wads out there, but here the player will often find they key they need just nearby the locked door or switch for the key. Or if not, the player is directed towards where one needs to go to get to the next area. Less time backtracking keeps the action going and the flow of the map is hardly sacrificed. This is not the case for every map however, E2M2, for example, had me going in circles for a bit before I realized where I needed to go. Crate maze-type maps tend to have that effect though.

Overall, the design manages to be nostalgic but original at the same time. Theres just enough detail to keep things from being bland and uninteresting. The well thought out layout keeps the flow of the maps going but the predictablility of the monster traps takes away some of the enjoyment of progressing through a map. This is not just a recreation of the original Doom episodes, it's a reimagining, and it's a good one at that.