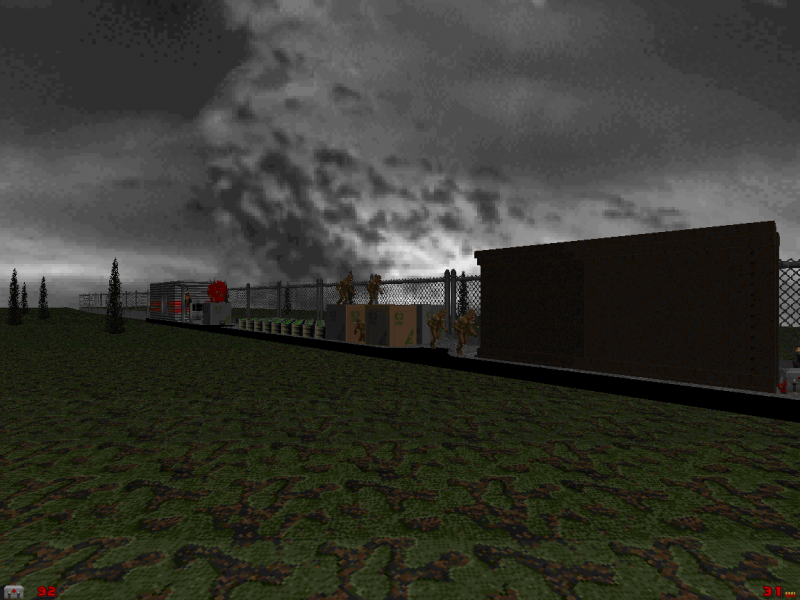 "Have you ever been on a train? Even wonder what a train ride is like?"

Well if not, here's a little bit of info to give you an idea. A train ride is pretty peaceful on your first experience. Sitting in one of the warm cabins in your seat looking out the window as the trees and hills pass by. The passengers all carrying shotguns, pistols and chain guns making sure you don't pass the doors to get to the back of the train. Demons in the pools of liquid that are being transported. Ah yes... train rides are the best.

Well in real life your experience may be different. As for the Doom marine though, this is as "first class" as he'll ever get when riding any train. This is "Runaway Train" created by Enjay back in February 25, 2001.

This is a single-map mod that is somewhat small and straightforward but gives a good challenge. The object of the game is simple; get to the key at the back then race to the front to stop it from crashing. The whole game takes place on a train, besides the train station where the player starts at, and is relatively small in terms of space that one can move around. The cabins are narrow and the cars are wide enough to fit maybe two Mancubuses at max. Even though the cars are small the map is still playable.

Both the train and the station do not have that much detail put into the structure, yet enough to still be recognizable. The chairs are simple blocks with a back, the liquid tanks are empty squares, and the station is like one big square with a few rooms in it and the outside where the train sits. The windows, however, are breakable, so that also gives a little more detail and a little extra fun. With this said, it's not a bad looking map either and gives enough detail to satisfy most Doomers. However, more detail doesn't necessarily mean a better overall map. Too much detail might actually hinder the player with distractions and lure their focus away from the game-play, which could cost them some health or even their life.

The music is fitting enough and matches with the "train" setting. Though Enjay had said that he "wanted something better, couldn't find it." There is also some ambient noise of the train moving down the tracks and glass shattering. The sound for the train racing down the tracks is pretty loud and doesn't stop until the player either succeeds in finishing the map or fails by dying.

One thing that is cool about this mod is that it shows a cutscene when you step into the train. It shows the player the entire train from front to back by using different still camera views. The only thing about this part is that sometimes it seems to take a little too long to show everything. Since the game does not save the player's progress after the cutscene, they would have to watch it all over again if they die and start back at the station. Chances are, unless the player is hardcore, they'll probably be seeing the cutscene a few times before completing the map. But at least they can see what lies ahead on the train so they can plan a little something out before they get back to the game-play.

The game-play for this mod is intense and will test any Doomer's skill. There are a few reasons for this. One reason is that there is very limited ammo and health in this map which provides a great deal of challenge. Though the amount given in the game is just enough so the player can successfully complete it. It's wise to not waste any shots and take extra care not to get hit by enemy fire. There are other weapons along the way that will help out a little, but it only gives the player a little edge as the weapons are not overpowered or anything. This keeps the challenge even through the entire map.

Another reason that the game-play is difficult is because there is a time limit. Of course a time limit does not cause physical harm the player, but now they are faced with something even worse. Knowing that there is a time limit puts pressure on them and will hinder them greatly. They'll want to get to the back of the train and then back to the front in time quickly to make sure they don't run out of time, but this leads to rushing through too quickly and taking on more hits along the way. This is because their focus is no longer on dodging enemy fire or staying in a safe area, but rather getting to the key and back in time.

The enemy placement is pretty well balanced out, making it hard to avoid or bypass them. The choice in enemies are also pretty well thought out as they are not all very hard or to easy. Most of the enemies also drop ammo for the player to use along the way. The chain gunners, for example, are placed in a few cabins and along the outside of the train. However, they are not spammed throughout the map, much like in many areas in Final Doom where one can suddenly be surrounded by ten chain gunners and take twenty hits in one second. This give a balance, much like the ammo and health, to provide a good challenge.

So in conclusion, this mod provides a very good challenge to the table. The level of detail is not amazing but still appealing to the eye and the game-play is frustrating but also stimulating enough to where you want to keep trying. So if you want to give yourself a fast-pace challenge that will test your skills, then give this mod a try. One map, but holy shit it gets your heart pumping.