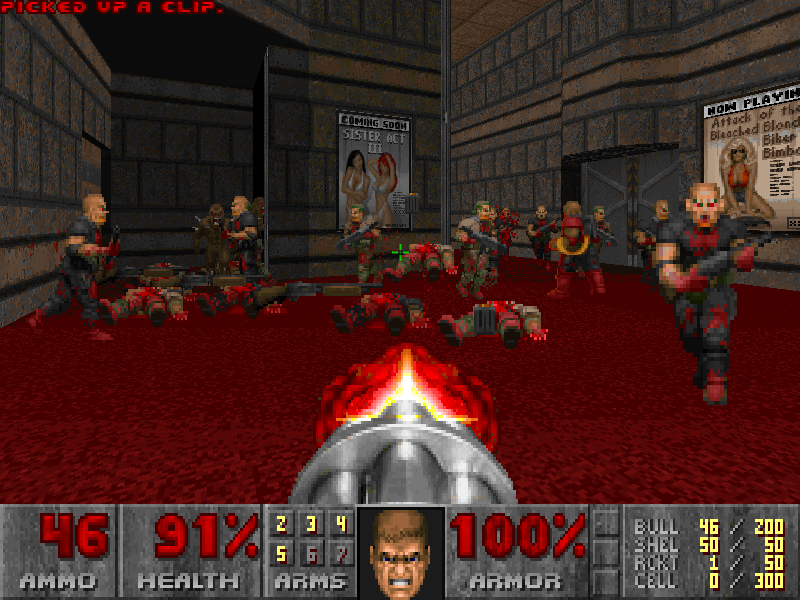 "Considering a port of another game's level for a review is a bit of a funny thing."

While the basic gameplay of Duke Nukem 3D and Doom are essentially the same, one of the biggest ways the two differentiate is in the level design. Duke Nukem 3D's levels are, when compared to Doom, able to boast of being A: more open for exploration, B: (relatively) more realistic with architecture, and C: far more emphatic on vertical layout. So, when it comes to porting levels back and forth between the two, a big question mark over everything is "How does the mapper handle the differences?".

J.S. Graham's Hollywood Holocaust is not a perfect 1:1 Duke-to-Doom conversion of E1M1, but it is a reasonably close interpretation. There are moments which are painstakingly recreated, there are some things with a "close enough" approach, and there are several outright different or removed things entirely--thankfully, the only major missing elements were mostly flavor, and while hardk0re Duke fans may especially miss the snarky one-liner on the Duke Nukem II arcade, the jetpacks, and the security cameras, the level itself remains mostly intact. Overall, it is a faithful attempt at a recreation, and is probably the closest Hollywood Holocaust experience a Doom fan could have without opening up EDuke32.

Even for someone who has never played Duke before, though, the level is solid. Taking place in a two-story movie-theater, it alternates between fights in close corridors and wide-open locales, broken up near the end by a small switch-hunt. While it sometimes suffers a bit from no real clear direction to follow, the level is small enough that even if you don't know where to head next it'll only take a minute or two to find out.
The biggest problem throughout the map, though, is a lack of lighting. It seems that the power inside has gone haywire, and so most of the time you'll be fighting either in darkness or in "just enough" light. Not always so fun to find yourself taking damage without knowing where it's coming from.

If there is one thing that both Duke and Doom fans will find taking them by surprise, however, it's the sheer number of enemies. While the level bestiary sticks with imps and zombies for almost the entire run, the sheer amount of numbers is thrown at you is nothing short of punishing. Where there was a single enemy before, six now take their place, and it's especially bloody in the intro section where you have just a pistol and a handful of bullets for them all.

Still, once you get the Chaingun and Super Shotgun (or play on a lower difficulty setting), you really feel like a 90s action hero all over again. Mowing through entire mobs with just your wits and superior firepower backing you up is always a treat, and if there's one thing the Doomguy knows how to do well, it's kick ass and chew treats.
At least, I think it's treats. And I think it was the Doomguy.
Eh, close enough.