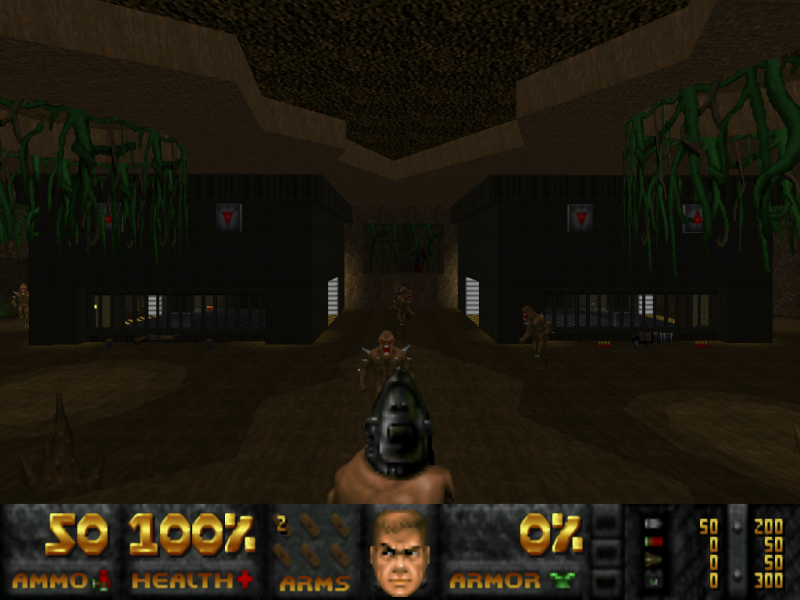 "But Jenesis is not only made of awsome level design and gameplay, it's also the impressive soundtrack"

Jenesis is one of those megawads that started only by a 11 mappack named "Jenesis, Pt. 1: Descent", then nine extra maps were released separately "Jenesis, Pt. 2: Beyond" and in the end the author released the third and final part, "Jenesis, Pt. 3: Abysm" which adds 12 new maps to the project (11+9+12 maps) transforming it into a new megawad (32 maps).

This megawad is a mixture of various themes like the traditional Doom 2, Plutonia, Requiem, Hell Reaveled, Sycthe 2 and Alien vendetta and if you love one or all of these you will obviously love Jenesis. But this mappack goes even further in terms of variety which is one of its best points: you start in a techbase map with open areas then you jump rurally into the mountains, after that you're welcome to a remake of one of Hell Revealed maps, the next are Plutonia styled maps until you reach some vaults and a ruined place, then a highway road to a teleporter station, then to a train station, subterranean laboratories, alchemy ruins and then to hellish & outdoor constructions, Jenesis varies a lot and you can see that each one is a very much carefully worked, thought-out and tested map.

Every map has an awsome layout and design so you can't feel bored walking beatifull paths to touch switches for locked doors, rooms and access to keys, it's far from labyrinths, they're mostly outdoor and almost non-linear maps. The texturing is quite pleasant to the eyes and it makes the maps look very alive and colorful (few megawads do this!).

The gameplay is just SWEET, having such good level design and lots of intense action in each level you can expect hours of fun but challenging moments too! There's also some few HR-style but this is not a slaughter megawad though. Two bosses await you in the end and the second one which is in the final map makes for a rather different experience in beating a megawad.

But Jenesis is not only made of awsome level design and gameplay, it's also the impressive soundtrack that keeps you constantly playing without feeling bored, every music fits well with each map, even the music is varied and there's some very memorable sound tracks in there!

Are we done yet?  No! There's also the secrets wich are impressive, not only the hidden areas you may search in each map but specially the two optional maps. Let's review only the first one since it's the best, imagine the two second maps of both TNT's Evolution and Plutonia joined together in one only map, this is what map 31 is all about, it's just impressively done and that was one of the most impressive memorable moments I had when played Jenesis, seeing the intermission description so well thought-out and written and then starting map 31 with a very rhythmic soundtrack that even made me blush!

If you want to read weak points from Jenesis you've better visit other projects 'cause there's almost nothing to be said in terms of weaknesses, unless I have missed some minor weak point. So in other words, Jenesis is for me (almost) perfect and if you missed this great project you've just missed so much, I assure you. If that's the case, wait are you waiting for? Grab it now!