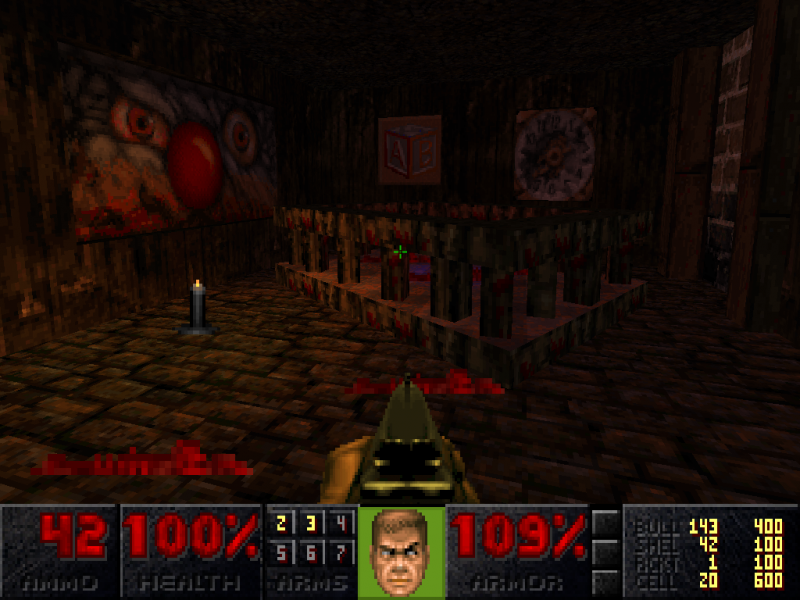 "Really, Unloved is one of those rare mods where it's hard to give a solid suggestion of approval or disapproval."

The idea of making a horror mod in Doom is an interesting one. Back in the day, Doom was one of the most horrifying games out there due to the fresh first-person perspective offering insane levels of immersion, the bloody twisted levels descending you straight into the maw of hell, and the monster designs coming straight out of someone's nightmares. More than a few wee lads (and wee 'dults) came away with browned panties, and a lot of people in the modern age want to recapture that. So, horror mods (or even dark atmosphere mods) are quite popular, to varying success or failure.

As media has expanded, however, the audience's tastes have expanded alongside, and so have standards for design. Now we have to have things like "suspense", "pacing", and "atmosphere". You can't just toss a blood spatter on a floor and expect people to be scared anymore. Some mods stumble at this and come off as pretentious, or even laughable. Others, well, make you squirt a little just by seeing a few screenshots.
Unloved? Well... Okay, let's take this from the top.

Unloved is a Silent-Hill-inspired hub-based mapset, set in the Doomguy's hither-to-unseen home, which likes to turn itself inside out at various opportunities. Being GZDoom, one can expect a lot of moody lighting and fog going in, and there's not really a single area that doesn't have at least five lights and a healthy amount of clouds in the distance. The levels, likewise, are all dark in design and feature plenty of extra details. You have eyes peering out at you from the walls, blood and corpses stuffed all over the place in very nasty areas, some very attractive alpha layering effects making some seriously ethereal-lookin' shit, and it all looks very beautiful. Gorgeous. Nobody can deny that the mod is very pretty and especially very atmospheric, with appropriate numbers of "very" to suit their tastes.
The level gameplay, though? Eehhhhnnn.

There are two major things working against Unloved's gameplay: Its architecture, and its horror. Though the hell-touched locales are truly marvelous to look at, when you're in a heated firefight running back and forth there's thousands of different protruding walls, decorations, and dips in the floor to get stuck on. Too many times will the player attempt to strafe left or right in order to dodge a shotgunner's blast, only to get caught on a small part of the wall. Too many times will the player be running through a narrow and claustrophobic corridor, only for a wide range of enemies to pop up behind them and charge.

Likewise, and perhaps ironically, despite the areas being so small and cramped the maps are huge and have branches leading every which direction. Open-ended sprawlfests aren't inherently bad, but the two traps that're easy to fall in are A: giving no indication of where to go and B: Putting someone on the ass-end of one map and the having the objective be the other end. Unfortunately, Unloved falls to both of these--while one could make an argument about how wandering around completely lost adds to the "feel" of Unloved, wandering around aimlessly loses its charm after the first few hours and starts being boring.

The horror, frankly, is almost non-existent. The locales are creepy and the music is unsettling, but when first impressions of those are over the player is still going up against the same typical Doom bestiary slaughtered throughout all of two decades. Add to that new Realm667 and Heretic enemies hap-hazardly placed in at seemingly random locales, and that hurts the feel even more. Love or hate the Ghoul's Forest series, but at least when you first encountered the eponymous ghouls you had no damn clue how to approach them. Here, after an ominous trek through the basement's basement in a blood-soaked prison, saws everywhere and the ominous sound of chainsaws circling you, you blast their heads off with a shotgun and continue on your merry way circle-strafing through a batch of imps.

It seems weird to put forth any suggestion in favor of Unloved after spending two paragraphs lambasting its gameplay, but despite the cloistered architecture, wandering levels, and poor scares, it really has to be emphasized just how damned beautiful it is. Unloved may play in a clunky manner, but it's full of memories that will stay in the mind for weeks to come.

Really, Unloved is one of those rare mods where it's hard to give a solid suggestion of approval or disapproval. There's always been a split in the community between mods that look good and mods that play good. All the way back to Gothic99, more recently with Greenwar 2, and now with Unloved, people constantly go back and forth about whether these mods with beautiful maps but lackluster gameplay are better or worse than mods that have enough gameplay to keep you hooked the entire while but look like a dog took a blocky dump in a flat square room. In the end, it's up to the player to determine what they want more out of the experience--do they want to feel lost in an oppressive landscape, or do they want a solid mapset that keeps them moving without any hang-ups? Give it a download and find out.