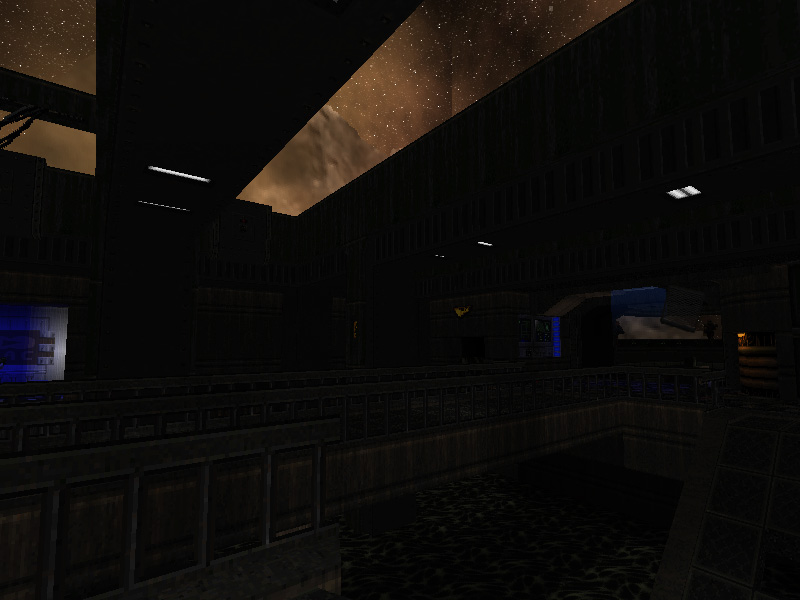 "The Refinery is Tormentor667's remake of E2M3: Refinery from the original Doom, which was at one point intended for the episode project, The Shores of ZDoom."

In this WAD, he takes a Doom 3-esque approach, which means you get a dark, dilapidated sci-fi base. You've got sparking lights, broken pipes bursting with steam, mangled corpses, the whole shebang, plus your usual infestation by Hell. To aid in this, the music has also been changed, from the upbeat intermission track to the quiet, ominous theme of E1M5: Phobos Lab (via the remix by perkristian). All in all, he does an admirable job trying to convey a feeling of horror. However, there are more important matters to discuss regarding a WAD when reviewing it besides atmosphere.

One of them is the layout. In case you don't know, E2M3 was one of several Tom Hall levels that were finished by others, which means it's largely flat, cramped, and boxy in structure á la Wolfenstein 3D, unlike the open, irregularly-shaped buildings full of height variation that John Romero built for the first episode, letting the game's engine stand out from that of its comparably primitive predecessor. Alas, despite the opportunity to rectify this, it has changed little in this remake: the structure largely remains as square and rectangular as ever, apart from a few caves and flesh tunnels built with slopes; and with some exceptions, the few relatively open rooms from the original level have been turned into additional corridors, or cordoned off with railings for the same effect. In particular, the slightly ellipse-shaped room from the original which contained a small pool of nukage has been turned into a square path with a nukage pit cordoned off by railings. There are notable and interesting uses of 3D floors in three rooms: a broken platform over a pool of water; a platforming sequence required to get a soul sphere; and a sequence where you must cross a winding bridge illuminated only by the lava beneath it. Apart from those, all height variation in this level is decorative and adds little to the gameplay; the structure, in spirit, is still flat.

Another important aspect to talk about is the gameplay. The first thing that stands out when you load this WAD is that selecting "New Game" will throw you right into the game, without giving you a chance to pick your skill level. Thus, anyone who prefers to play WADs on lower skill levels first will be out of luck. The second is that you start with no weapons other than your fist, which makes no sense from a tactical perspective (why would a soldier, "too tough for Hell to contain" or not, go in with no guns?) or a chronological one (how did you lose all your guns from the hypothetical previous level?), but is meant to instill a feeling of terror. The third, of course, is the bestiary. Your first four monster encounters are, in order:

Noticing a pattern here? It seems Tormentor667 chose to use as many monsters from his Realm667 Repository as reasonably possible, whether or not they gel with the atmosphere and regardless of balance. Thus, on one hand, you have enemies like the aforementioned Hangman, who is regularly placed where he can deal the least amount of damage; in one case, he can't even see you! On the other hand, you have foes like the Auto Shotgun Guy, who can knock off chunks of your health before you even realize he's there.

If there's one thing this WAD suffers gravely from, in fact, it's inconsistency. On more than one occasion, you can have an easy time taking out some high-ranking demons, only to be suddenly dispatched in the next room by an overpowered zombie. More blatantly, however, it occurs as the side effect of Tormentor667 relying so much on his Repository: the bestiary runs the gamut from original sprites, to edits of IWAD sprites (excellent or sloppy), to content swiped from other games. One of these is the Pustule, a protozoid slimer from Duke Nukem 3D painted red who sounds like the Spawn from Quake and explodes for some damage when it's close, who is so slow that by the time it would get to you, you've killed five of them. More brazen is the guest appearance of the Vore from Quake, complete with model-to-sprite conversions, sounds, and a homing projectile that rounds corners... which is faster than the original was. The overall effect is that the monsters you face, placed next to each other, don't look like they belong in the same game. This also happens in more subtle ways in the architecture: the level makes occasional use of 3D midtex railings, meaning you can jump over railings in some rooms but not others; one puzzle requires you to shoot a button, but the "button" is clearly a lever; and just like with your swarm-killing punch, the haunting atmosphere is threatened by the appearance of a "bacon" warning sign. I know it sounds like I'm nitpicking, but when the author explicitly describes his remake as "something more real and creepy," these things matter.

Once you get through all this, you start the level over again, only to find that "something's different." You would be right. You have a different route to go through, the order you get the keys has been changed, and the music has been switched to the theme of E2M6 (again, remixed by perkristian); but more importantly, the monster and item placement is completely redone. This time, it more closely resembles a regular Doom level than survival horror; it's possible to get every weapon, all the standard monsters show up, and the battles are structured more traditionally. Unfortunately, it still suffers from inconsistent difficulty, as it adds more powerful zombies with similar problems to the Auto Shotgun Guy (who appears more frequently, at that). Among others, there's a zombie with a railgun capable of both rapid-fire and a more powerful charged shot, with an audible wind-up period before he attacks... but it's little encouragement when he's far enough that you can't hear him over the sounds of death and gunfire. The high-level monsters get used more often as well, in ways that, at times, can prove strenuous. Eventually, upon beating the level a second time, you will get an unskippable credits sequence that lasts around four minutes, which will be torture for prospective speedrunners, especially given the timer is still running as you watch it.

Overall, this WAD makes a brave attempt to bring a horror feel to a familiar level, with appropriate gameplay, but is let down by poor balance and the feeling that despite all the bells and whistles thrown in, it doesn't feel much different from the original. It remains to be seen whether the remake that will appear in The Shores of ZDoom in its place will be remarkably embellished or more of the same. For now, you could try this at least once, at least to see Tormentor667's take on it first. It should take around half an hour for each version of the level, and as long as you play carefully, you should be fine. Just don't go in expecting Cacoward material, or you will be disappointed.