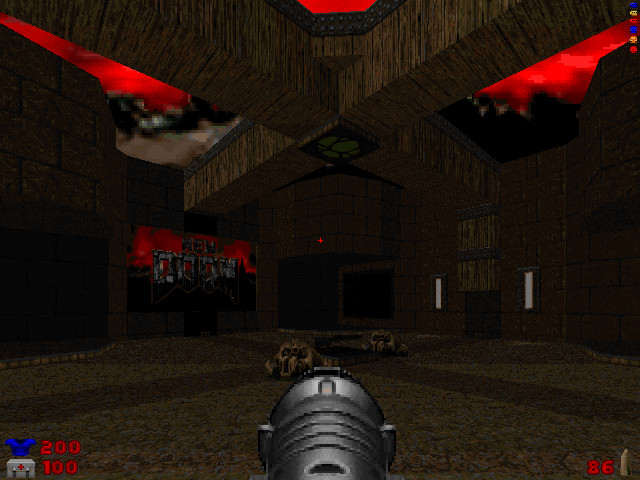 "Singleplayer only, this wad contains new original music and lots of textures derived from Quake I."

Description
Singleplayer only, this wad contains new original music and lots of textures derived from Quake I. Tormentor says he named the map Torment and Torture because it's very bloody, and it is that. The gameplay definitely keeps you on your toes the entire time. Interestingly, because he had some trouble understanding the unclear (at least to him) rules, he began to build his level late Friday night. He says he could have called the level "Wad on a weekend" but resisted the temptation.

Nevertheless, the result is an excellently crafted and FUN singleplayer Dooming experience, and our choice as the contest winner. Tormentor667 wins a Doom t-shirt and a very detailed original trophy graphic created by Mindless Games & Entertainment's own Ron 'DraX' DeFreitas (who also designed the website here at NewDoom.com), which will be signed by some id Software employee or other (!). The graphic itself is awesome. We'll post a scaled down version later so everyone can see it. Congratulations to Tormentor667, and thanks to everyone who submitted their wad or contributed to our fun little contest in any way. Until next time!

Story
As you wake up, you find yourself in a middle-lit room without a ceiling. Only a few tubes prevent the red light from falling down to the ground. In front of you, there are two Hell Knights, but they haven't recognized you yet. You see a Combat Shotgun in front of you, lying on a small platform. That's your chance, get the shotgun and mow the demons down...

Major Highlights
The Libraries consist of some nice ornamental textures. But beware, for behind every bookshelf there could be an Archvile ready to blow you away. The upper libraries make use of a nice room-over-room effect.

The Temple of Torture: You open its large portal, oblivious to the fact that over a hundred monsters await your arrival. Take the Rocket Launcher and try to stay alive as long as possible. Once you have killed them all, take a look at the nice mosaic ornaments to your left and right.

The Tech Center: Here you activate a switch to open the entrance to the Dungeons of Torment. This triggers a nice ACS Script with earthquakes, fading lights, some text, not to mention a Cyberdemon and some twenty Barons of Hell.

The Chaos Machine: Use the yellow key to enter a room where everything is seemingly quiet. Until several Spider Masterminds and Cyberdemons appear. The only way to save yourself is by taking one of the two stairways leading upwards. Several Imps appear, but you easily show them the way back from which they came. You see another switch, but you haven't forgotten that the Demons still await you. Regardless, you flip the switch and a large earthquake begins to rumble down the hall. A bright, white light blinds you and all you can hear are the terrible sounds emanating from the dying Cyberdemons and Spider Masterminds...