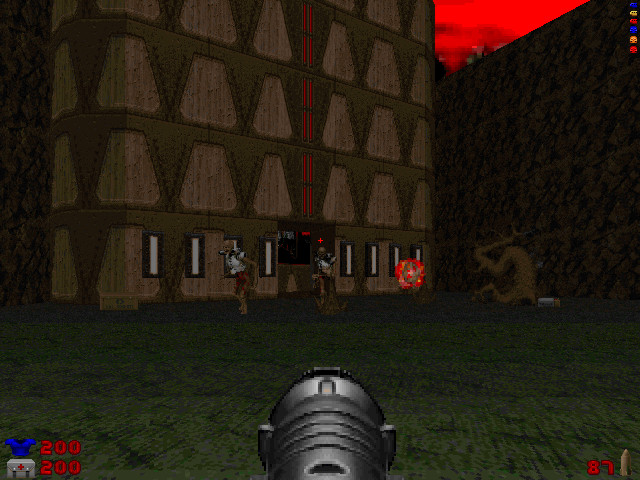 "Torment and Torture is a single-player level with a music replacement and several texture replacements, which are all very nice."

It's for Zdoom and uses several effects like swimming, earthquakes, etc. Oh yeah, it won the NewDoom "Wad in a Week" contest!

The design of the level is above average, but not amazing. Although the architecture is very good, there isn't much detail added to the rooms (a light here and there, some holes in the walls, but nothing more). Do keep in mind that the level was designed in one weekend (or so the author says), which is pretty impressive, when you see the result. All in all, "Torment and Torture" is a good looking level, with just enough to make you relax for a while, and take a look at the environment.

Now, let's take a look at the gameplay. This level was very fun to play (twice). On UV, it's challenging, but still very playable. There is enough ammo to shoot every monster twice (which you will, because of the arch-viles). That's a nice change, after all those levels full of non-berserk fist-fighting these days. You'll find plenty of health to keep you standing, including a couple of soul spheres. A good thing in this level is the dark atmosphere, greatly enhanced by the new music. You'll never feel comfortable again, after being chased by an invisible arch-vile (and all the demons, which he resurrected). And when you enter the upper libraries, you'll wish you didn't forget to bring you diapers!
"Torment and Torture" is a very fun level, with lots of health, ammo, and enemies to keep you going! If you're looking for first-class design, you'd better go to another level. But, if you're in for a challenging and fun experience, "Torment and Torture" is your man! Rating by Doomer's Recess: 79/100%