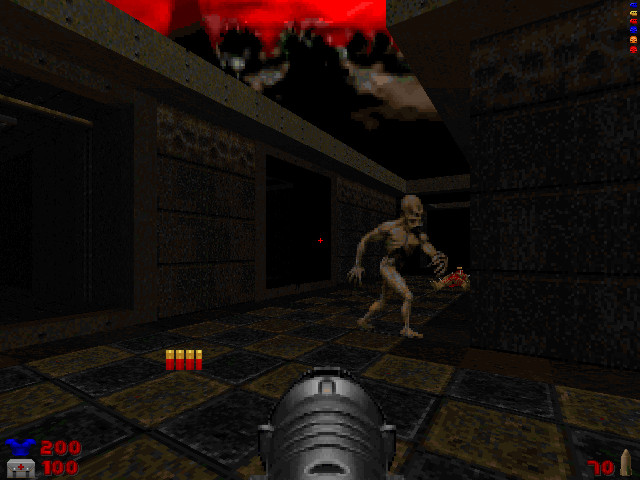 "Tormentor picked some nice and moody music to fit the map just right. I don't see anything out of place at all about this music."

Detail / Map Layout:
Rating: 8/10
Here we have an older map from Tormentor667, Torment and Torture is the first in a series of 3 long, quake-esque wads for ZDoom. Torment and Torture was apparently part of a contest at NewDoom, called the "Wad In a Week" contest, so that implies that the wad was made in less than a week. Anyways, on to business. This first installment of the series is rather short when compared to its sequals, but still, for a map made in a week, it's very impressive. There is quite a bit of detail, and uses Quake's textures quite nicely. Some may say the map is too brown, but hey, it uses Quake textures, and anyone who plays quake knows that the pallette is probably 250 shades of brown, and 6 shades of blue/gray. The brownness of the textures doesn't really bother me that much.

Gameplay:
Rating: 7/10
Torment and Torture has some mixed gameplay. One minute, you find yourself walking around dark corners and run into maybe a couple demons and some imps, and the next minute, you're fighting off about 30-50 monsters all at once, although there is plenty of ammo to help you kill off all of them. Overall a pretty fun map to play.

Difficulty:
Rating: 6 (Somewhat Annoying)
For the most part, this map isn't too difficult, but there are a couple parts that can annoy, such as the chapel area where you get the red skull key.

Replay Value:
Rating: 7/10
Well, this is one of those maps that might stick with me for a while, and I might dig it up and play it every week or so. Not something I'd play obsessively or anything.

Sounds/Music:
Rating: 10/10
Tormentor picked some nice and moody music to fit the map just right. I don't see anything out of place at all about this music.