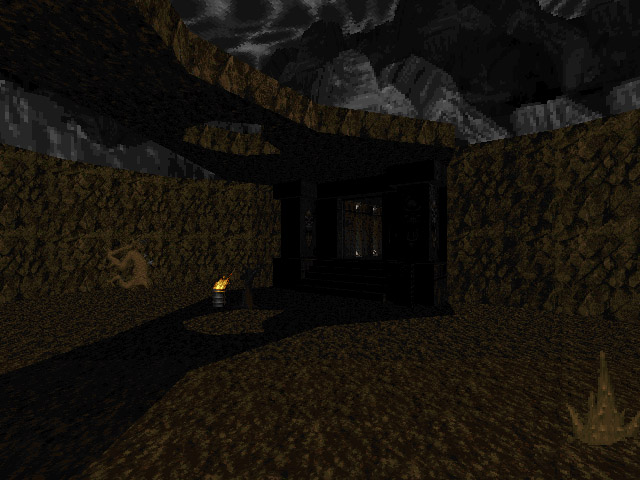 "Unreal has some great music, with which Tormentor made good use of in his map."

Detail / Map Layout:
Rating: 9/10
Torment and Torture ventures deeper into the world of Quake with this astounding sequal, the Armory of Pain. Torment and Torture 2 is a large, quakeish map, with lots of ZDoom features being used. I don't think anyone can argue when I say that this is definately a great looking map. The archetecture and level design is fantastic. The level of detail is definately above par. The atmosphere of the map is very moody and dark (and at times, really dark). Tormentor makes even better use of Quake's textures in this sequal.

Gameplay:
Rating: 6/10
Although the map looks really nice, I can't really say that I like the gameplay of this map more than the first map. It's got some average gameplay in some parts, and some pretty nice gameplay in other parts.

Difficulty:
Rating: 7 (HARD)
This is definately a very difficult map. I have yet to be able to beat it without cheating (or saving 50,000 times) on Ultra-Violence.

Replay Value:
Rating: 6/10
Well, large maps like these, in my opinion, are only fun to play every once and a while, because of how time consuming they usually are. The nice looks and good use of ZDoom features helps the replay value a bit, though.

Sounds/Music:
Rating: 10/10
Once more, Tormentor steal--picks just the right music for this map. Unreal has some great music, with which Tormentor made good use of in his map.