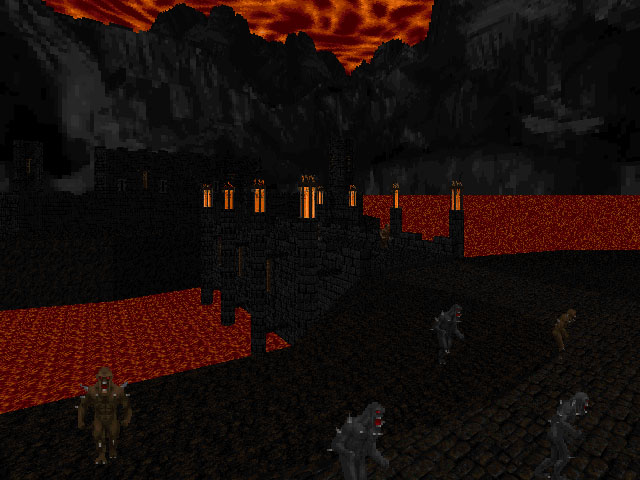 I noticed quite quickly some similarities, but the theme is refreshingly different. The music is quite excellent and fits the levels well, and the new monsters (all of which are based off old ones) are very interesting to combat. The end map messagescould use some updating though, as both feature numerous grammatical and spelling errors, which I suppose can be expected of a German authour. Also, the first message is so corny it almost made me laugh. All in all, another excellent and interesting map by a very talented authour.

Map01
This map started didn't interest me terribly at the start, but a few things later on really made up for it. Although I can't say I liked this map more than Torment And Torture 2, it certainly had a lot of original ideas of its own. It was a pretty linear though, with only a few remote and double switches to mix things up. The lighting is excellent as always, and the atmosphere was pretty good, but far short of it's predecessor. The theme here was a little strange, feeling like an odd mix of Heretic, Hexen, and Quake 2. All in all though, another excellent map by a great map authour.

Map02
Shorter, end boss kind of map. Pretty good, although if I'm not mistaken, the endbosses take every attribute of the maulotaur, yet from their appearance don't look like they'd be capable of nearly so much life. Other than that, I don't have any real qualms with this map. All in all, a short and to-the-point endboss map.