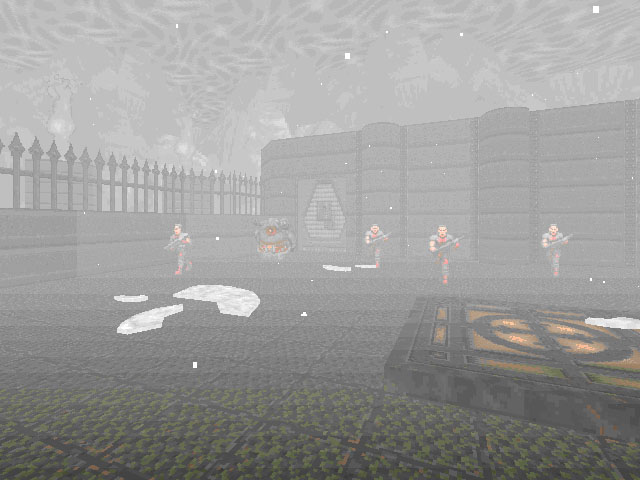 "TNT 3 is everything that TNT 2 could have been but wasnt, it goes beyond TNT 2 to a state of mind that just doesnt exist in normal gaming."

Design
After TNT 2 I honestly didnt expect that this installment of Torment and Torture would live up to its prequel, i didnt think anything could, the last one was geniusly crafted. Boy was I wrong, could not have been MORE wrong. The level design is beautiful, snow sections, cave sections, cavernous sections, cargo bay sections, it has everything. There is one part of the map that was just genius, and I HAD to go to the automap to see how he did it. Theres a room with windows that looks out into the underwater part of a lake, and you go up some stair on top of that room, and overlook the lake, GENIUS, you have to see for yourself. Slopes were used extensively throughout, adds a tremendous amount of feel to the game. Excellent level, thought out well, played well. No Complaints at ALL!

Difficulty
This section is off the charts I died just as many times as I did in the TNT 2 battle arena. I, should have mentioned this in the previous section but i thought it would be too crowded up there, lol, but he designed all new characters for this game, as well as manipulating some of the existing ones to behave in different ways and use different attacks. You just have to see them to believe them, I'll say this for sure, the new imp will scare the bejeezus out of you the first one you run accross with the sound of its attack. Overall on the difficulty I was very pleased, nothing too impossible, but just hard enough to make ya have to try a couple times. Great play!

As with TNT 2, this one will get lots more play, theres things I would like to try differently to see if the outcome would be better, like having more ammo or more health at the outcome, all in all very good playability facotr, I'm keeping it, for a long time.

Overall
TNT 3 is everything that TNT 2 could have been but wasnt, it goes beyond TNT 2 to a state of mind that just doesnt exist in normal gaming. The final battle distilled an amount of genuine fear in me that i havn't felt since my newbie days of playing DooM. Absolutely incredible. Another perfect ten! If I could give it an 11 i would!