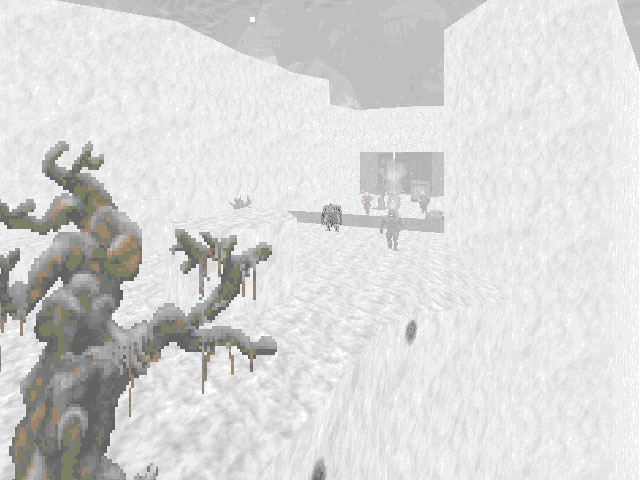 "It really can't get much better than this. If he didn't make the maps SO tough then this would have been a perfect score."

Tale of Two maps - Map 1
Torment and Torture 3 is truly a tale of two maps in the respect that I really need to give each of the two levels a separate review based on my experience with each. The reason for this is that the first level WILL drag your system down to a crawl if you are not running something in the neighborhood of a 1 ghz machine or better. I have a Pentium II 400mhz with 256 megs of ram and a Geforce 4 with 64 megs of ram for a video card just so you can get an idea of where I'm coming from. This wad also brings to the forefront for me the problem I'm sure many of us are going to have with Doom3 when it finally arrives on the scene. To play the first map in this wad and not have lag you need a very good computer. Doom3 will be similar in that respect and that is why I am feeling alot of people may be disappointed when it gets released. Anyway - on to the review....

DIFFICULTY RATING
This one was misleading at the beginning with the creatures easily defeated and the player moving through the level rather quickly. Even before you hit the halfway mark though It gets infinitely more difficult and on Ultra Violence I found myself running out of ammo with a shitload of badguys to kill and no way to get to the ammo because my health was down to nothing. What made this much harder for me and what is causing me such consternation is the fact that it dragged sooooooooooo badly that I couldn't fight effectively and ended up wasting what I considered vast amounts of ammo trying to kill stuff that was killing me before my character could react. From what I've seen so far tho - there is scarce ammo as it is. Thats fine. I've designed many a level with very tight ammo so thats cool. The lag really killed me tho. I had no chance in this map because reaction time just wasn't there. So - if you have a processor with less than a PIII 750 mhz processor and a really good video card and plenty of ram I wouldn't even bother with this map. Its no fun getting your ass kicked when you have no chance to fight back.

PLAYABILITY
See the above. The map followed pretty well and there was nothing really difficult to figure out up to the point where I simply gave up hope of ever finishing this map.

LEVEL DESIGN
Tormentor never ceases to amaze with his mapping skills. Of course, he does use the best port on the planet for his designing and can throw in tons of cool features like fog, snow, slopes, etc... He takes advantage of everything that Zdoom has to offer. This map is magnificent in appearance. A visual showcase that never stops giving. As he puts it - you will be amazed. Too bad all that beautiful architecture is wasted on many of us. No matter what processor, etc... you have - this map is at least worth looking at.

OVERALL SCORE
Aside from the other stuff mentioned above - there are some new sprites which really look awesome and he picked music to go with the level that seriously enhanced the entire experience. That said, many of us don't have high end machines and really can't just walk out and buy one. Its a beautiful map - one of the best I've ever seen but on my machine the gameplay is garbage and I got a headache trying to fight in this creation. Too bad.

RATING: 9
A Tale of Two maps - Map 2
DIFFICULTY RATING
I walked into this one cold since I couldn't finish the first map so I started it on -skill 2 instead of Ultra Violence and whether or not it was designed to be played that way I was able to get very far in the map in this way. Even on the lower skill level this was a tough map with tons of archnatrons, Hellknights and even Archviles scattered around not to mention the usual array of baddies. I can only imagine what Ultra Violence must be like in this thing.
RATING: 9

PLAYABILITY
This map played great with not too much difficulty in figuring out what my next move was to be. The fact that everything wasn't moving in slow motion helped alot!

LEVEL DESIGN
This is a castle design done to perfection. I guarantee you won't find a better looking design in any map anywhere. It even makes the first level pale in comparison.

OVERALL SCORE
It really can't get much better than this. If he didn't make the maps SO tough then this would have been a perfect score. Enjoy!