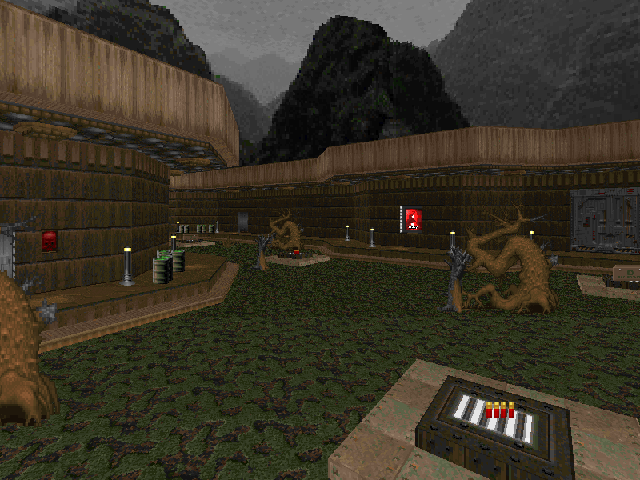 "It simply kicks ass and shows the world why Tormentor is arguably the best mapper to ever make a map for Doom2."

DIFFICULTY RATING
Ok, then, let's just jump right into it then. ARRRRRRRRRRRRGGGGGGGGGGGGGG! This is TOUGH with a capital T. I died several times before I was actually able to make any inroads into the City of The Damned! Countless attacks took me in various directions till I found a spot where I could preserve my health, had enough ammo and left the monsters little room to maneuver in order for me to get a foothold with my assault. Once I did make my presence in the city known and had used up a couple of save slots I was able to penetrate further into the quagmire that Daniel created. Plan on spending ALOT of time in the city. Once again, I found myself hunting for secrets within the city walls while coming across newly released badasses to fight while on my quest. Be patient. You will need to be.

PLAYABILITY
Except for the occasional lulls after I tore through everything in site, this map moved along quite well. I did spend some time searching for various articles or switches which were needed to progress through the map but despite how it looks at first, the city isn't all that large and you will find what you need. It certainly isn't linear by any means but you will get stuck if you can't find the switches or keys that you need.

LEVEL DESIGN
Once again, Tormentor shows me why I, personally, think he is the best Doom2 mapper on the planet. This map highlights his Blood Resource pack which is available for download and use in your own wads on Tormentor's Realm
, his personal site. I have to tell you, this is one of the best looking texture conversions I have ever had the pleasure of viewing. In conjunction with Daniel's unerring eye for detail and the wonderfully creative ambient sounds and the new music this is an experience worthy of the Doom Gods. Even when I was getting my ass kicked I was admiring the scenery (perhaps that is why I was getting my ass kicked).

What more can I say about this map? It simply kicks ass and shows the world why Tormentor is arguably the best mapper to ever make a map for Doom2. I have to wonder if the creators of Doom could have ever envisioned something this beautiful yet so eery being created for the original game that they set the world on fire with? If you don't download this and place it into your personal library of great wads then you should be shot where you stand, hung by your nads and lit on fire to burn in Hell for all eternity, and a day! I am giving this map my best overall score because everything combined makes for an unforgettable experience!