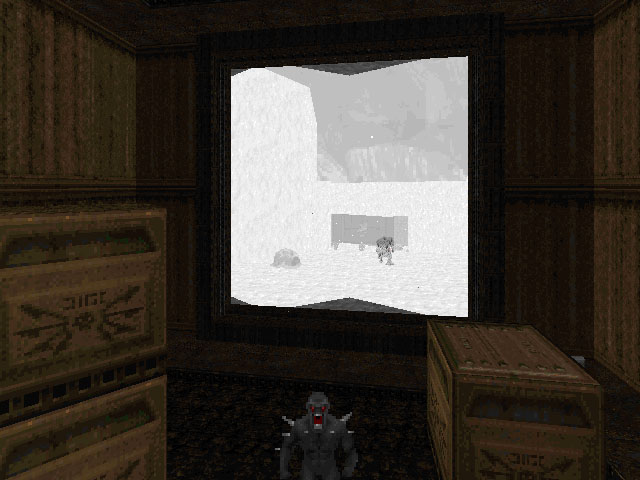 "Unreal has some awesome music, and apparently Tormentor thinks so too, as he uses some more Unreal music in Tormetn and Torture 3."

Detail / Map Layout:
Rating: 10/10
The Fortress of Damnation is a two-map continuation of the Torment and Torture series, which feature dark and gloomy, quake-esque maps that make very good use of ZDoom's features. This second sequal is definately the best looking in the entire series thus far. I would even go as far as to say that this looks better than most of the maps in Quake itself! The first map, the Icey Peak, is the larger of the two maps, which features some nice, wintery scenery outside, and some really nice techy/hellish stuff on the inside. The only problem I have at all with the amount of detail in this particular map is that it can cause lag on my system in certain parts The second map, The Evil Heart, is a shorter, hellish castle map. The map is almost as good looking as the first map, although I did notice a single missing texture (which is replaced by a white checkerboard texture) in the tower with the two arch-viles in it. Other than that it looks great.
Best Looking Map in the Set: MAP01: Icey Peak

Gameplay:
Rating: 8/10
Torment and Torture 3 is definately the most fun in the entire series as well. The monster and ammo placement is great. I didn't often find myself running low on ammo. The only gripe I have is that if you forget to save every so often on the first map, you can find yourself right back at the beginning. If only Tormentor had added a few spots where the game would autosave? The second map isn't quite as fun as the first, because it's more of a boss map. Basically, you just run into a few rooms, grab a key or press a switch, and go fight the bosses, which are spiders from Blood that have the same attack pattern as the Maulataur from Heretic.
Most Fun Map in the Set: MAP01: Icey Peak

Difficulty:
Rating: 6 (CHALLENGING)
Not quite as hard as the second in the series, Torment and Torture 3 is more challenging than difficult. There can be some times when I find myself getting annoyed, but for the most part, it's not too hard.

Replay Value:
Rating: 8/10
I've played this map many times already, and I expect to play it many more times later on. It's definately got the highest replay value of the entire series
Map With Most Replay Value: MAP01: Icey Peak

Sounds/Music:
Rating: 10/10
Unreal has some awesome music, and apparently Tormentor thinks so too, as he uses some more Unreal music in Tormetn and Torture 3. This music fits perfectly. There is also some tense boss music in the second level which, also, is perfect (although I can't tell what that music is from).
Map With Best Music: MAP01: Icey Peak