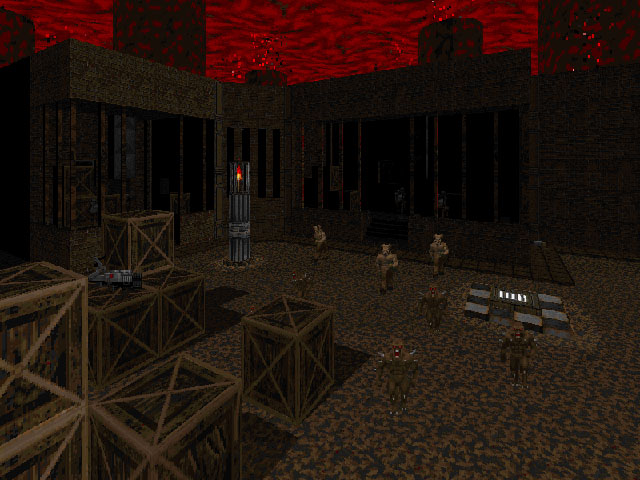 "I think this is the most beautiful .WAD with Gothic/Medieval theme and style ever"

Playability: This time I am dealing with a very playable .WAD. As its name says, the level is set in a city, more exactly in a town, with Medieval and Gothic style. So you will play in big open areas, where you can range through; unlike Virgil The Doom Poet's "Claustrophobia", here you will often have to face up open battles and to manage several fronts. At the beginning you haven' got a specific path to follow, but it will be realized little by little, so that you can discover most of the city before beginning your specific missions. Although this .WAD runs with ZDoom and exploits some of its features and ACS scripting, it is not the .WAD you could expect, since it lacks a story and a particular development (through ACS scripts). But it has a good gameplay: in fact, at the beginning you are free to roam about the city, then you'll have to find all the keys and, while searching for them, you'll have to follow some "switch paths", as I call the sequences of switches to press in order to solve puzzles, as weel as fighting against monsters. The only flaw is a ZDoom bug in the final showdown, when you fall in the void area: suddenly ZDoom crashes. Unfortunately this forces me to lower the assessment. Assessment: 8!

Graphics: This is one of the most impressive and greatest .WAD I've ever played in my long Doom experience. It competes with some other .WADs (such as "Sacrifice in Blood" and "Hell Factory" and other ones in development) for the graphic supremacy. Grandiose Gothic and hellish architecture, great care of details, fine combinations of textures, flats and colours, painstaking lighting and shading. What else?! It is simply fantastic: I could notice no errors. Excellent work. I offer the author my congratulations on his fine job. Assessment: 10! Don't you believe me?! Then look at its screenshots in the relative section.

Difficulty: Even in this aspect Tormentor667's .WAD don't disappoint: in fact, the author managed to create a very challenging level: it is not hard, although there are some tough moments, but it is not even easy. Open battles prevail over close ones; for that matter, the map is set in a town... There is a nice mix of harder and weaker monsters, which alternate so that you can't know how gameplay and difficulty develops. There are lots of Imps, Zombies, Shotgun Guys and Chaingunner, but Cacos, Hell Knights and Baron of Hells are over there. Health is not scarce, but it is scattered: if you are careful, Medikits and Stimpacks are more than enough. As for ammo, it can run out, if you waste it; so be precise when you take aim. The toughest moments are those with Arch-Viles: they are deadly and they always appear suddenly; so "be quick... or be dead", as "Iron Maiden" teach. The final showdown with 2 CyberDemons is extremely challenging and fun, but you'll have to take out all your Doom skill, in order to beat them. Assessment: 10!

New graphics: This .WAD reached the highest assessment in the "Graphics" department thanks to new great-looking graphics: in fact, the author used only new fine textures and flats, which make this level unique. They were taken and converted from "Blood" by Monolith Production. I must congratulate the author on the fine usage of them. There is also a new titlepic Assessment: 10!

New music: There is a new nice track by "Lexus Asylus", that fits the map very well. The same author defined it as an "ambience and moody .OGG" and "amazing". Oh... and it changes when you are teleported in the final arena. Assessment: 10!

New sounds: There are some new sounds too: I think they come from "Heretic", that you surely know. Assessment: 10!

Overall: We all know the value of this fantstic level, by this time. I think this is the most beautiful .WAD with Gothic/Medieval theme and style ever: great-looking architecture, fine usage of new graphic resource, nice ambience music, new good sounds and challenging difficulty. Are you asking for more? Well... maybe gameplay could have been improved, but this is one of the greatest .WAD ever. I would have liked to give an overall 10 to it, but unfortunately it didn't reached it! I assigned the "shooting soldier" (or "you can't do better!") symbol to it, but the author must know that he really can do better... in gameplay! But he deserves my congratulations.  Assessment: 9.5!