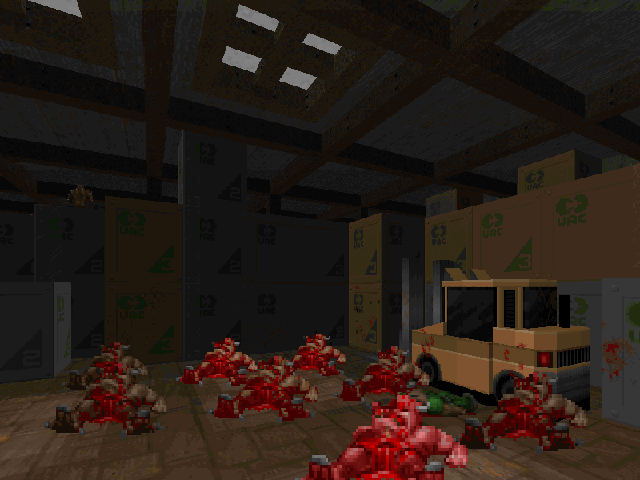 "So, what should I write now? I think that it's the best .WAD ever."

Playability: It requires Zdoom... It was designed for it. So it has a great gameplay, comparable only with Tomi Rayala's "Hell Factory". Here is every ZDoom feature you can imagine: slopes, coloured and phased lighting, deep water, translucent lines, mirrors, cameras and ACS scripts, which all make this level unique, with a great ambience. But probably the most important of these feature is ACS scripting, that is well done and is used to implement objectives to complete. ACS scripting is not widely used, in fact some puzzles are made just through the use of switches, keys and other features. Although the .WAD lacks a story, your mission and the settings are very clear. Moreover, the .WAD isn't complex at all, though it is composed by several authors, whose parts are well-connected. On the contrary, I'd say that it is quite linear, apart from puzzles, which make you wander around the level to and fro. Maybe it is a little too long: it will make you busy for nearly two hours; but it is worth spending so much time. So the gameplay is excellent. Assessment: 10!

Graphics: We are dealing with a .WAD that is excellent in every department and it won't dissapoint you even in graphics. Every part of the level is highly detailed and shows an awesome architecture. It is nearly impossible to find a bare wall or an empty sector. Everything is painstaking: all the authors focused even on the smallest details. The themes and styles used vary broadly: from the tech-base theme to the hellish one, with natural landscapes too. ZDoom graphic effects (slopes, coloured lighting and so on) are used wisely and make the architecture more impressive. I couldn't find any bugs and errors, apart from some little misaligned textures in the stairs leading to the Draining Pump, in the Blue Key Card-locked building on the right of the main courtyard, in the first area. But I can't surely blame the authors and consider this a bug: the level is so big, that is impossible to make it perfect, without any misaligned textures; it's impossible to find and fix all such little bug. So the authors put a great effeort in this departement and must be praised for it: good work, you made a great-looking level, maybe the most beautiful I have ever played. Assessment: 10!

Difficulty: This is a wearing level, especially because of its size. I don't want to say that it is hard, although some parts are really difficult, but it will immerse you in a intense challenge, that won't ever finish. Ammo balance is good: it isn't tight at all, but it is enough and, sometimes, it is even abundant, although the last part of the level (i.e. the hellish one) lacks of ammo. Health is just enough and power-ups are provided in the most dangerous areas. Monsters are usually well-placed, but there are some monster placements which make some parts very nasty and, sometimes, even irritating, such as those where bats scratch you from everywhere. Big monsters appear quite soon, whereas big weapons much later. Some secret areas are intuitive and easy to find, although you usually won't find anything useful there; on the contrary, more other secrets are not so clear. I myself found just 40% of secrets. Anyway, this .WAD will provide you a nice challenge, apart from some hateful moments. Assessment: 9!

New monsters: There is a big set of new monsters, that is used together with the normal Doom 2 set. They come from the "Monster Resource .WAD" and they all are nice and great. Assessment: 10!

New weapons: There is just one new weapon, the Freezer, a very nice and useful weapon, that freezes monsters, which then break into pieces. But there is also a Nuke, a sort of warhead: it is not really a weapon, but a special rocket, more powerful than the normal. Assessment: 10!

New graphics: The .WAD includes new textures, flats, sprites and a lot of other graphic resources, such as new trees, but also new logos, which are used in the closing credits. They all look nice. There are new titlepic, interpic and credit screen too. Nothing to complain about them: they are well made. Assessment: 10!

New music: Yes, there's new background music: an .IT from LexusAlyus. It's not bad at all, but its first part soon turn monotonous, because the first part of the map is very long and music don't change till you reach the arena. I mean that it is nice, but you can get bored listening to the same part of the background music for quite one hour! Assessment: 9!

Overall: So, what should I write now? I think that it's the best .WAD ever. I think that we will hardly play another .WAD like this. It shows a deep gameplay, an involving and realistic ambience, with nice music and good sounds, a great-looking architecture, an intense challenge, new great monsters and weapons. Just download and play it: this is my suggestion. Assessment: 10!