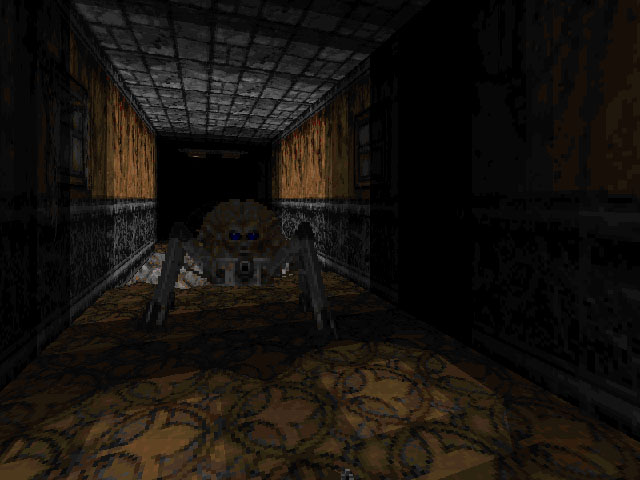 "They're used really well, and build up the overall city feeling of the map considerably."

First note that I didn't manage to finish this wad, as I got stuck and wasn't able to advance. Was it a bug the author may have missed? Perhaps. Was it me not being sharp enough to spot some button? Much more likely. Now, this is a tough decision for me to make, but I consider this being a minus. The reason? I'm quite perceptive player when it comes to games like doom, and it's quite unlikely that I'd miss something that the player was supposed to see. So we end up in a conclusion that either there actually is a bug, or that the switch or whatever was too hard to notice that it's possible to advance by regular means. That aside, let's head to the actual review:

Gameplay: 7
The map has a rough start. There's already a battle going when the map begins, and no time is given to lose. A bad idea, in my opinion, but will do. After the start, things start cooling off, and when the player has cleared the first big battle, the map actually begins. The first question arises early: "Where the heck am I supposed to go now?" No worries there buddy. Even though the map is quite large, and there's much to explore, soon the player gets the whole picture of the map. There are alleys and bigger roads, and buildings and other stuff between them. The atmosphere is done very well with the heretic style music and stuff like guillotines and graveyard.

Map Design: 8
Soon, after the player has familiarised himself with the map, it is possible to really start playing, in other words, try to complete the map. The map follows a tight routine, go there and press the button, now go through the opened door and get the key and open the door that's found in the street near the start. It sounds worse than it is, because as we know, it's impossible to make anything more complex in doom, so yeah, this map isn't linear at all. Luckily zdoom's possibilities have been used, as if the player isn't given a key so that he about knows where to go next, a short cutscene is shows where a door opens. This really decreases searching times, but on the other hand, I'd enjoy looking for the opened passage myself. It's a matter of taste, and I think that the author's solution works quite well.
The level has many optional areas, which don't hold anything significant, but which the cleanser Bob can sweep in search of some ammunition or health. I like to have them onboard, because it's always a sign that the map wasn't made big just so that it takes long time to finish, but because there were certain areas the author wanted the player to see. The level holds a consistent theme, although a place or two are a bit out of place. I didn't expect to find lava pools in the city, but let them be forgiven, for they're in hell after all.

Difficulty: 5,5
This is the portion I disliked the most. The map has really easy portions, and then suddenly the player may encounter an extremely difficult battle. There were a bit too many arch viles to my taste, and they often spawned right next to the player by surprise, and thus forcing the player to save quite often in fear of an arch vile spawning next to him. Besides the arch viles, the battles were quite fair most of the time. A few times I got a bit annoyed, but after a few loads I was able to get through properly. Also the boss fights were a bit silly, and often caused just improper amount of hassle. The final boss fight was, shall we say, bloody difficult, but that's all I'll say about it.
I played on Hurt me plenty, and ammo placement was a bit too generous when compared to the rather average amount of med packs. Also armors were really scarce. Throughout the whole level I can recall finding two. More would've made the map a bit more balanced. As for weapons, I can't complain. They're given in suitable places and thus offer nice surprises even to the latter parts of the level.

Visuals: 7
A good amount of new textures is what points to my eye the most. They're used really well, and build up the overall city feeling of the map considerably. The map depends on its visuals pretty much to the textures, as smaller details aren't found as often as I really expected. Even having that said, I find the map to be very pleasing to look at. There are some sort of volcano things on the scenery, and people hanging from the building walls. The graveyard deserves a special mention, because it was really cool looking and really created a tense feeling. There were two things I didn't like, though. One was the scrolling skybox, which made the sky look like it could scrape some of the buildings' rooftops being so low. The other thing I didn't like was some strange effects which were done poorly; a fireplace for example was looking terrible.