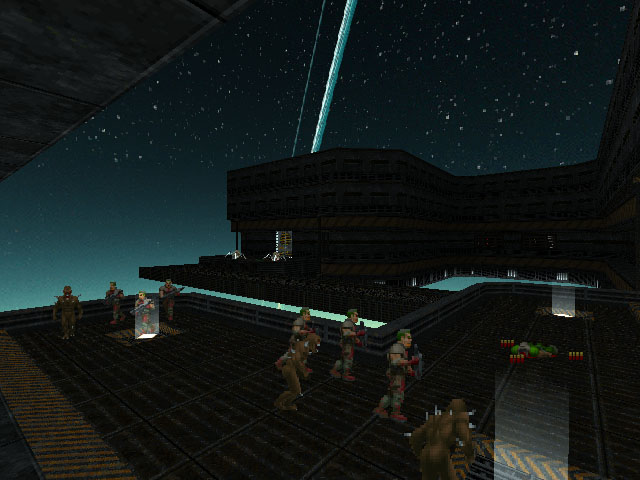 "This is a medium sized map based on a space station, a research facility for engines powered by simulated black hole"

Intro: After visiting Tormentor's site I decided to download Sapphire to see what the heck it was all about. I played the map in GZDoom and it ran great with no problems. Screenies taken in same port.

Comments: It took me almost an hour and a half to complete this map on UV. Suffice to say, I'm no speed runner... haahaa. Anyways this map is set on a rather nifty looking space station that is all decked out with custom textures and a snazzy skybox, plus some of the floors have a very nice reflective surface going on. Overall the map looks great as you can see by the screenshots. The level is certainly not boring with multitudes of dangerous critters that want your blood, including a new version of one of the Doom 2 demons (not going to give it away) that's a tough son-of-a-hellspawn, which helps makes for some interesting fighting. At one point I got a bunch of various demons in a big in-fight and then I got the demons from the next hallway to join in and I went back above to a safe place..... what a riot. Not to say that was the best part of the gameplay but it was memorable. Fun stuff in a cool map, gotta like it. It should be interesting to see what Tormentor does with Sapphire 2.....

Author Sayeth: This is a medium sized map based on a space station, a research facility for engines powered by simulated black holes, maintained by the Sapphire Corps. To achieve a believable atmosphere it uses some of the latest advantages of GZDoom such as real skyboxes (Halflife and Q3 style) and true color stuffage.