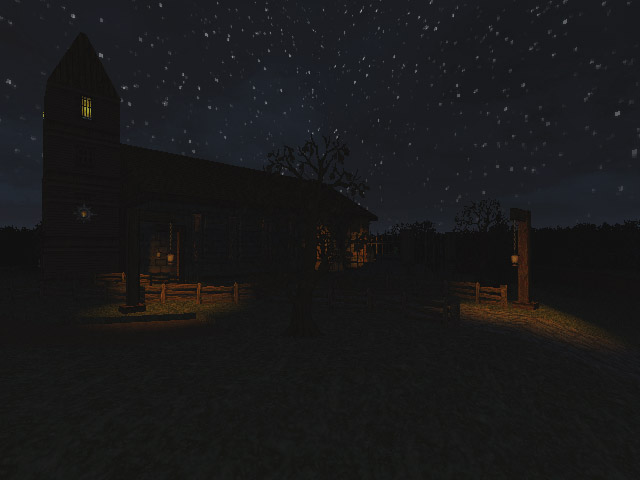 "Architecture is quite simple, apart from few things, but very good-looking thanks to new graphics resources."

Playability: This is a single level .WAD for GZDoom, that will make you really busy and will take you a long time to complete it... more than 2 hours! But don't get upset: the level is really enthralling, with an involving ambience... and ACS Scripts and GZDoom features really enhance it. Gameplay is based mainly on action and key or item hunt, but there are some puzzles to solve... and this is done by messages that you must read to gather information and understand what to do next. The map is quite large and gameplay is quite non-linear, but you won't get lost, if you read villagers' messages. The author didn't write any story, but you'll understand it while playing, by reading those messages... and it's quite interesting and a bit unusual! Maybe you'll notice that gameplay resembles that of the prequel, "The City of the Damned". To sum up: gameplay is more adventurous than usual, but still Doom-ish. Very good! Assessment:  10!

Graphics: The author used only and extensively new graphic resources, without using the old and classic "Doom (2)" textures, flats and sprites. Level detail isn't very high, but not bad: just look at terrain, sidewalks, borders, streetlamps, tombs, columns... So, architecture isn't painstaking, but is surely great-looking thanks to new graphic resources and GZDoom effects. Look at the Church from the outside, just to get an idea! Lighting is wisely used to create gloomy and creepy ambience; dynamic lights and other great effects enhance it: just look at the fire near the start area to have an idea! To sum up: architecture is quite simple, apart from few things, but very good-looking thanks to new graphics resources. Assessment:  9!

Difficulty: This level is quite hard, even at 3rd skill level! Why? Because the author didn' use any original "Doom 2" monsters, but used new enemies, which are much stronger and tougher... though it is not easy to say, because you are provided with different weapons. This means that experience doesn't count so much and that seasoned players have got a slight advantage on less experienced players! The problem isn't the monster count, in fact you usually face one or two monsters... rarely you have to fight against groups of enemies; but their placement or their sudden apparition is nasty. You'll need more shots than you'd think to mow down these monsters, so always look for cover while fighting them; moreover their firepower is very high, whereas you initially have to fight them with your bare hands and a fork... then a pistol... and only later with a shotgun. Only toward the end you get a chaingun and just before the final challenge a sort of rocket launcher. Ammo is well balanced: this means that you shouldn't waste it. Health is provided as portable medikits, so that you don't have to look for it, when you need it: some monsters give you "life essence" (that is health) when dying. Some secrets are easy to find, but power-ups are almost non-existent, apart from armour. Beware of traps, some of which can be deadly! I suggest that you save often, especially when you think something strange is going to happen. After some progress, a siren will sound from time to time... the first time you don't have to worry; I am not going to spoil here what happens, but the first time you survive! Next times you'll hardly survive, if you are not in a safe place. Battles take place both in open and wide areas (usually outside) and narrow rooms. The final challenge with Thamuz (a sort of CyberDemon) is nice, though a bit too easy with that powerful sort of rocket launcher. To sum up: maybe it's a bit too challenging... too harsh! Assessment:  8!

New monsters: As mentioned above, the author used just new DECORATE monsters in this .WAD and no original "Doom 2" monsters, which they are inspired to: there are the shotgun guy, the chaingun one, very fast and dangerous demons, a sort of Imp, etc. Some of them are just modified version of classic "Doom 2" monsters, such as a sort of Lost Soul or Thamuz. They all look good, but they are a bit too strong. Assessment:  9!

New weapons: To fight against these powerful monsters the author provides you with a new arsenal: you start with just your bare hands, but on the beach there's a pitchfork, that you can even launch towards your enemies with the "alternative fire" key; then you'll get a pistol and later on another one (dual pistol), whereas in the meanwhile you get a powerful shotgun, that can fire two shots in one with the "alternative fire" key; before the final showdown you can take a powerful rocket launcher! All these weapons look quite good, but it's a pity you get the powerful ones only towards the end; actually you can take the shotgun quite soon, but it's heavily guarded, so you need ammo and medikits, before venturing into the cemetery, where the shotgun is hidden: ghosts and zombies won't let you take it so easily! Assessment:  9!

New sounds: There are new ambience sounds, that are used to create the right atmosphere, as well as those for new monsters and weapons. Sometimes they are bit too loud, but not bad! Assessment:  9!

New music: There's a background music throughout the level, that changes according to situation, especially during important battles: it always fits the gloomy and creepy ambience and its pace increases to fit the beat of your heart during crucial fights. Very good! Assessment:  10!

Overall: This .WAD is not bad at all, though quite hard: graphically it's awesome, thanks to new graphic resources, though architecture doesn't show a painstaking level of detail; gameplay is interesting, enlivened by ACS Scripts and GZDoom features, that helped the author to do some puzzles; difficulty-wise the level is more than challenging, though fighting against new monsters with new weapons is surely interesting; new sounds and music enhance the dark and mysterious ambience.Assessment:  9