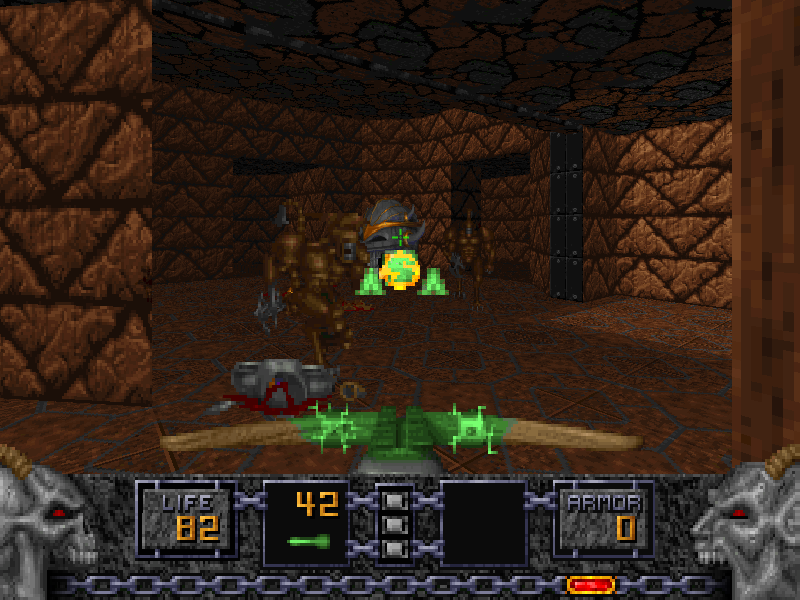 "This treatment does not change as you traverse through the rest of the map."

There's something to be said for getting your first step on a familiar foot. There are three things you will first notice upon opening this map. The first thing is that you are in a vaguely hourglass-shaped room with stone surrounding you, and not much variation in detail. The second thing you will notice is that in front of you, on a pedistal, is an Ethereal Crossbow, two quivers of ammo, a flask, and a Morph Ovum. By the time you notice these two things, however, the third thing will have overwhelmed and pounded you, because the very first enemies you will face are a large pile of Weredragons, Sabreclaws, and Golems teleporting in from nowhere.

Old Memories is a replacement for the first mission of episode 4, an episode in Heretic infamous for its particularly large number of enemies and its somewhat-wandering level design. It follows this formula almost religiously, with corridors loaded with enemies--the entire ordeal feels like a sort of "ye olde slaughtre-lyte" with repeated intervals of running down corridors and fighting off miniature swarms, rinse, lather, and repeat.
While it's admirable for a map to stick to its guns, after a while it starts getting horribly predictable. The readme boasts that the level is "non-linear", and while one would think this provides a sort of distraction from all the killing, what it actually translates to is less of open-ended exploration and more a lot of running back and forth around dead ends.

What else set Episode 4 apart from the rest of Heretic, however, was its beautiful design. While it was just as simplistic as many other 1996 maps, both its easily-navigational (if not sprawling) architecture and the moody lighting helped it to shine out. Old Memories, unfortunately, only achieves half of this. The map is certainly quite full of wide areas, and there are very few parts (aside from a notably frustrating tiny corridor against an Iron Lich and a closed room against a horde of ghost Undead Knights) where movement is cramped. Its biggest failings, however, is both the same-y architecture and the general emptiness. While it's undeniable that a stone fortress would have lots of stone, aside from the doors and pillars it certainly feels that stone is all there is. Decoration is almost nonexistant as well, aside from the mandatory pillars and windows--if it weren't for a couple-minute trek out to an outside area in order to pick up the blue key, one would think that the author had little care for detail at all. While certainly not ugly, the entire map has a lifeless and empty feel to it. One could joke about how appropriate this is for the undead, and one could also make a valid point about how this emphasizes the gameplay rather than distracts people with pretty architecture, but as a whole it barely does more than simply suffices.

In fact, one could say that about the map as a whole. While it's certainly not a bad map, it's one that simply suffices and does little more to try and overcome it. Gameplay is the usual simple thrash-and-trash, the design is a usual grey-brown stone fortress, and together they create a map that has very little technically wrong with it...but also does very little technically noteworthy. While Heretic is slowly starting to recieve more and more maps for it, compared to the cumulative giant that its sci-fi brother boasts, fans of Corvus and his adventures have relatively slim pickings of what sort of quality they can sift through. For someone that wants a Heretic map, this is worth picking up, but only to fill in a potential void until they find another (hopefully better) map.