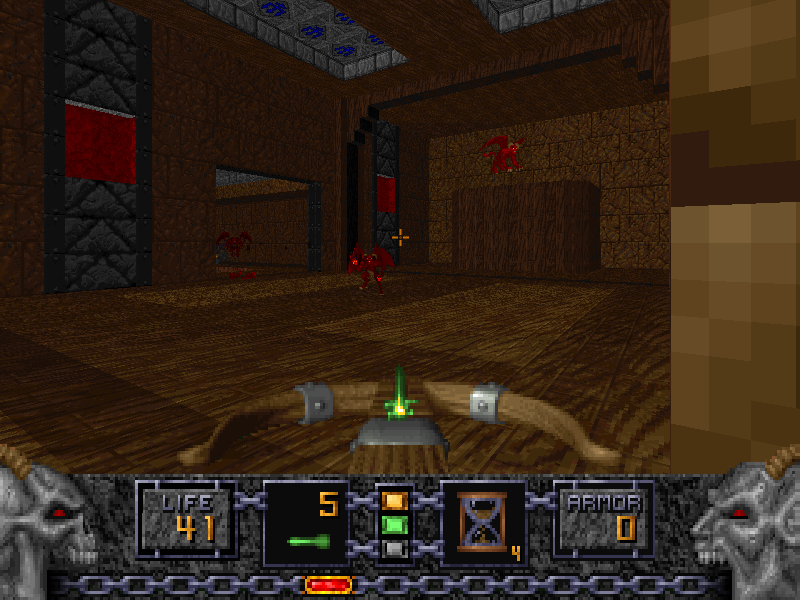 ""Height variation" is an interesting term in mapping, referring to, well, the variation in height that a map has."

A map that's a perfectly flat plane is rarely anything interesting, and a map where you have to go up and down a mountain tons of times is significantly more annoying than anything else. Often there's a lot of trouble trying to find that special sweet spot that hits the mark between a mountain and a flat plane.

Old Memories 2 hits this in an extreme way right off the bat. From the start there's a lot of lifts and stairs that swing up and down, and you'd be hard-pressed to find rooms that don't have lifts, grooves, or creases in them. Everything is a constant up-and-down motion, and many times you will find yourself right next to another section of the map seperated only by an inability to fly or fall. Those with vertigo need not apply, and those without may enjoy the rollercoaster.
The visuals, however, seems just as dull as ever. It picks right up from the yellow-stone-and-black-metal-fucking-everywhere from the first, with a depressing overuse of sandstone, black metal, and metal-studded wood being the mainstay throughout. Texture placement is sometimes questionable, with wood leading into rock or rock leading into metal, or metal leading into wood, and with a few notable exceptions almost every single area ends up looking just the same as the last.

If there's one thing that's especially noteworthy, though, it's the gameplay. The first Old Memories set itself up as a sort of "ye olde slaughtre-lyte" map, while Old Memories 2 seems to aim for a sort of miniature Metroidvania experience. You start in a fairly confined space at first, but the more keys you get, the more areas connect to each other into an ever-expanding circle. As you hit switches and grab keys in the new areas, enemies flood in the previous areas, giving you something to shoot at even as you go back and forth.

Of course, gameplay isn't completely perfect. For one, you get the Firemace, Dragon Claw, and Ethereal Crossbow within just a couple minutes of starting up, but ammo heavily favors the Crossbow early on and the Claw later on. For two, sometimes the backtracking gets especially obscene--one later part, you have to hit a switch right next to a blue door, then trek all the way across the map to grab the blue key, then trek all the way back to the blue door. For three, there is still very few health pickups available, rendering the entire thing mostly a gauntlet of endurance.

Despite the ups and downs, though, is it better than the first? Yes. While the original Old Memories was worth a download simply by value of being a Heretic map that didn't suck, Old Memories 2 actually has a modicum of quality attached to it. The problem is that with everything that the map did better than the last one, there's also a bit of a downside to go along with it. While not entirely perfect, losing some points between the same tan-black overuse of bricks/metal and the lack of proper ammo/health, the biggest problems with the first have been addressed. Now there's some interesting architecture, and now it's not a constant slaughter-fest. With some more polish, more usage of textures, and some actual items strewn about, Old Memories 2 could become a serious contender for a great map. As it is now, however, it sits at just barely reaching "good".