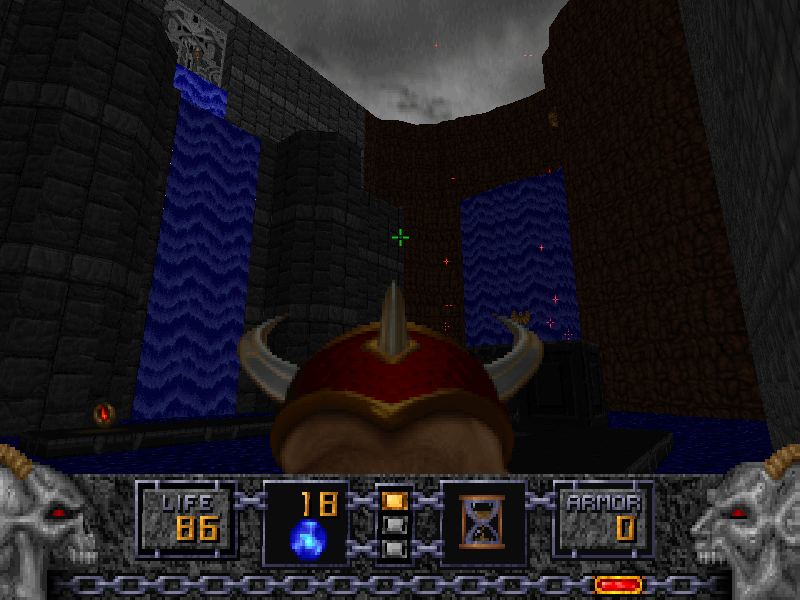 "Cookies on Dowels is a short one-map deal for Heretic, replacing E1M1, the lovely and legendary Docks."

The author says that it's his first attempt at a Heretic map, which instantly brings up cause for concern.
First maps are usually a bit of a crapshoot, partially because the art of mapping is incredibly elusive. Sometimes you get some genuine quality behind them, when the first-timer knows about design, flow, and gameplay. Other times, you get a nice idea that doesn't get put down very well, or a crappy idea given far more attention than it deserves.

Thankfully, this seems to be a very clear case of the former. Though he says it's only his first attempt at a Heretic level and he's actually made some other stuff before, but first times are still first times, so whatever. Either way, Cookies on Dowels, though short, is a magnificent map that stands as a beacon amidst the gamut of average-to-okay Heretic maps out there.

The map itself seems to take place in some sort of hybrid...fortress...cave...industrial thing that defies all explanation, but exists sheerly by virtue of being badass. The setting could change with just a simple run of a hallway, with the player starting off in an aqueduct-prison-lookin'-kind-of-place, fighting a quartet of wizards in a gothic-cathedral-lookin'-kind-of-place, and ending in a towers-of-death-floating-over-lava-lookin'-kind-of-place. There's even some ice strewn about, just for the hell of it. Is this constant change in scenery the least bit sensible? No, not in the least. You'd think it'd act as a problem, and perhaps another player would call it schizophrenic. I, however, say it ensures constant visual variety and fresh scenery. Besides, if all else fails, just say D'Sparil did it. It's not all hyper-cool blame-a-wizard shenanigans, though. There are a few areas with the brightness turned down and the darkness turned way up, too dark to really see anything going on--thankfully, though, these areas are mercifully brief.

Gameplay is standard, textbook almost. Run around, hunt keys, hit switches, and fight enemies; with no puzzles to solve and no jumping tricks to leap around on, it's a straight-forward run-and-gun fest. There's not really an area where you don't know where to go next, and every place leads into the other quite nicely. It hardly does anything new, and there's certainly nothing original, but the age-old formula is done so well that there's certainly no complaint to be made.

If there had to be any sort of complaint, though, it would perhaps be just how short the entire thing is. It sits in at barely over ten minutes of play--perhaps even less if you don't spend a lot of time admiring the scenery. For people that want to spend a lengthy amount of time playing quality work, getting fully immersed in things, this will not cater to them. For everyone else that wants quality maps, though, especially quality maps for Heretic, this simply cannot be suggested enough. It may be short, but every single moment is spent in glory.