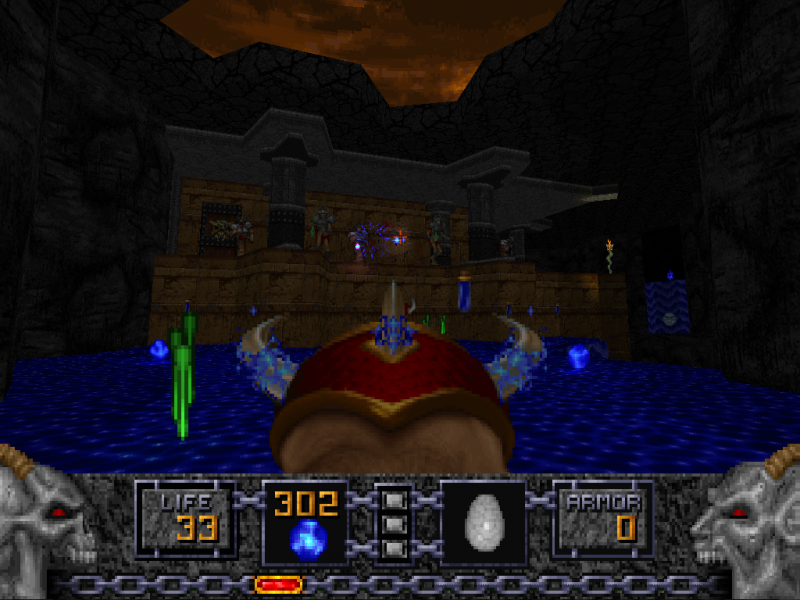 "I've always been wary about community map projects or compilations."

To risk being Captain Obvious for a bit, there are thousands of people out there with different thoughts, opinions, and ideas--and one of the areas where these differences especially shine through is mapping. There's some people that believe in roaming and wandering Metroidvania maps, where you unlock more areas as you progress through and need to hunt for switches and keys with a sift and comb. Others believe that maps should be straightforward and linear, always moving in a line and with very few hangups and puzzles--if you're not constantly blowing someone's head off, you're doing it wrong. Even something as simple as whether a switch should be turned on or off in order to light up can be a source of nasty disagreements. In the best scenarios, this means you get a fresh experience with every map, and things rarely get stale. In the worst scenarios, your experience will be schizophrenic.

Heretic Treasure Chest is a megawad with an admirable goal, to create a multi-episode megawad for Heretic that can run on any limit-removing port in single-player or co-op. A very lofty goal, and definitely a much-needed niche to fill--especially as ZDoom-powered multiplayer source ports like Zandronum and ZDaemon get popular.

Unfortunately, the schizophrenic experience hits in full force very early on, as very little effort is made to tie the maps together in theme, playstyle, or difficulty. The first episode goes from sort-of-a-canyon place to Egyptian tombs to a strange cave/town thing to an absolutely fucking gigantic sprawling doom fortress. There's even a level from the HeXen mod Necrosis, transferred directly into Heretic with only enemy/weapon alterations. Episode two, on the other hand, sticks with mostly samey and under-decorated caverns and castles, and episode three seemed to start out reimaginings and retakes on levels of the original Heretic before ending with...whatever.

The gameplay seems to have been hit the least with the the constant shifts in map design, and the quality seems to stay consistently at "okay-ish" throughout, with a few forays into the damned impressive. E1M9, for example, has the entire level upside down while the player walks about on the sky, trying to solve puzzles from above. E2M7 also has an especially memorable part where the player flies over the lava passage to an alcove where they make a last stand against endless upon endless upon endless waves of Gargoyles, and E2M8 is just breathtaking in its design near the end. Unfortunately, these moments are few and far in between a gamut of average maps. While very few of them are at all bad, save for perhaps E2M3's fetish for annoying door puzzles and E3M5 punishing the player with instant teleport-death for taking a perfectly legitimate shortcut off a cliff onto a greenbridge, only a fraction truly stand out in the mind after all's said and done.

Supposedly, this is the norm for community map packs--I'm told by some colleagues that a few bastions of sheer amazement among a pile of "okay" is hardly news for a community map-pack and is actually quite a good mark. Those intimately more familiar with community map packs than I are probably just shrugging at this point; what else can you really say about a community pack? It's almost impossible for one to be crammed from beginning to end with sheer orgasm, every mapset is going to have failings.

It's still quite a shame, however, to have a megawad designed to show the strengths of Heretic and end up leaving with a only a few vague thoughts that amount roughly to "Well, that sure was a thing". For a treasure chest, there's decisively little gold in here, or even silver or bronze, but it lacks any sort of major badstuffness to act as a turnoff for prospective players either. While there's certainly plenty of other average or even crappy mapsets that are made notable by virtue of other things, such as commercial history/extensive handmade graphics/custom scripting, Heretic Treasure Chest doesn't really boast a lot of that.

For Heretic fans, however, there are definitely far worse ways to spend hours. It'll hardly make any converts, but hey, not many other wads allow you to re-enact 300 with one psychotic elf versus a staggeringly recockulous amount of gargoyles.