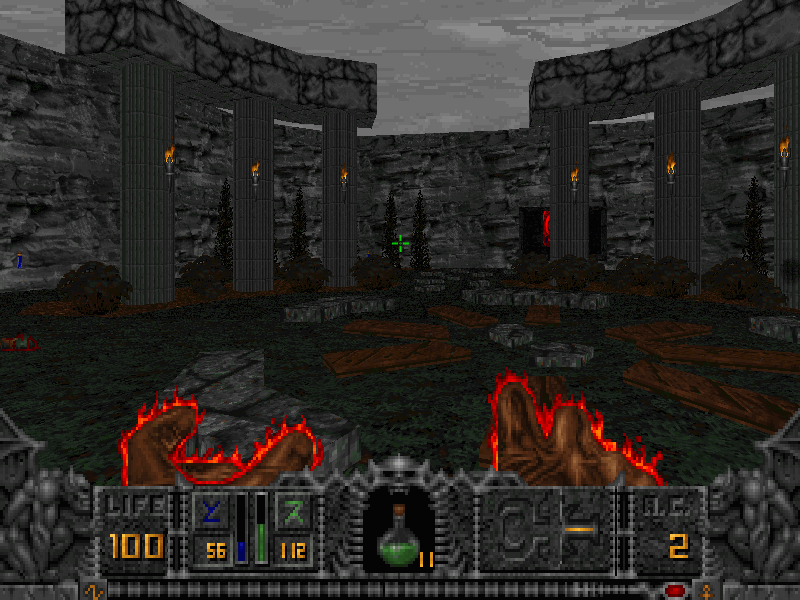 Scourge of Viscerus by Matt Tropiano

"Poor HeXen. Along with Strife, it's been the neglected red-headed stepchild."

Even Chex Quest gets more attention than HeXen, and Chex Quest was a PG non-violent novelty. The gamut of average-to-okay maps that plague Heretic is even more prominent in HeXen, in which you're lucky to find something that's A: Decent in quality, and B: Decent in length.

Then comes Scourge of Viscerus, possibly the closest thing HeXen currently has (and perhaps will ever have) to a megawad mapset. Sitting in at a cool seven maps and with plenty of scripting, interesting locales, and original boss fights, just saying that it's a HeXen mapset that's good should be enough to merit a download. But, well, that's not my job here.

While the maps are the typical HeXen grey-brown deadlands and castles and cathedrals, all of them are fairly large--large enough to explore for a while, even if you have nothing to do in them. Despite mostly using the stock HeXen resources, every area stands apart from each other, with just enough detailing to keep interest as you trek through. Combine the stock textures with the "just enough" details, though, and the more visually-oriented graphics-loving gamer will definitely be turned off.

The gameplay and difficulty, on the other hand, is a little on the sporadic side--one room near the end of the intro map is especially punishing for anyone but the Mage, while navigating different levels is a breeze and there's generally not a lot of traps. The enemies like to swarm the player in some sections for a faux-slaughterfest, and charge leisurely one after the other in other sections. Some of the bosses are beyond cruel, like one instance where you have to fight all three Masters at the same time, and others are wayyyyyy too easy, such as how some of the Disciples just require a steady circle-strafing. More old-school gamers with a twitchy trigger (wand?) finger and a desire to simply solve puzzles and kill will be greatly pleased, but those more interested in slow transition and build-up over time will likely find it a little jarring.

Everyone, however, will be greatly pleased with the additional atmosphere on top of the whole experience. If there's one thing that Scourge of Viscerus' scripting does well, it's bringing you into the whole experience--the intro area fades in and fog parts from your vision in another hub, the enemies taunt you with an unmarked grave, there's some small cutscenes to tell you where to go after you finish a puzzle, and the final arena is a surreal ride along a hectic fight.

Being one of the few lengthy hubs for HeXen, it's tempting to give this an easy ride--but it really doesn't need it. While it's not a detail-fest, nor a script-fest, nor a custom-content-fest, it's got a decent amount of all three to make the experience not only memorable but incredibly fun.

It's certainly not for everyone, as some will want more than a "decent amount" of all three. Starving HeXen fans will be pleased to pick this up, though, and even those more interested in Doom than its sibling games should give it a go as well.