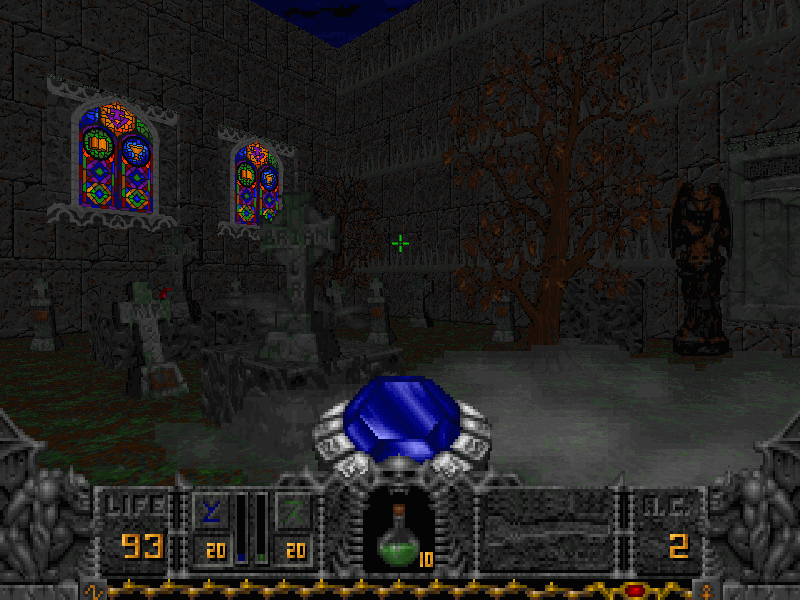 "Let's talk a bit about risk and reward. It's definitely not a concept exclusive to games."

It's felt universally across many walks of life: A good reward must have a high enough risk to obtain it, and a risky endeavor must have a suitable reward to feel like it was all worth it. In mapping standards, this is pretty easy to see: Out of two paths, if you take an easy path with very few enemies, and nobody would reward you with the BFG9000. Take a path chock full of enemies, traps, and annoyances, and nobody would reward you with a single armor bonus.
Hexcity is a decent map that trips on a grave misunderstanding of this.

Let me clarify a bit.
For a mid-90s map, the design is certainly nothing to complain about. It looks like a nice medieval city, and there's all the usual haunts one would expect--an armory, a hotel, a graveyard, a church, even a set of gallows. Being from the mid-90s, there's barely any detail to speak of and there's a few areas where it's clear that the mapper was trying to make SOMETHING but didn't quite make it, but as a whole the city seems like it'd be a fun area to romp around it. Well, at least, fun before all the monsters came around. The map is also wide open for exploration. There are very few areas that you can't access from the start, and oftentimes the only thing blocking these areas are keys. This sounds like a nice thing, but the problem is that there's no point to it. In just a couple minutes of playtime you can find yourself right in front of the exit, and that's not even speedrunning--just head in the sewers, take a good turn, head down a corridor, and voilà.

The only thing that would keep a player from going through the exit is the sense of "I haven't finished the level". But, really, that would be the finish right there--there's no special fights, no unique items, no sense of progression that would justify continuing on. Perhaps the only thing that would convince a player to stay longer is that the classes get their second and third weapons here, but even then it doesn't take a lot of exploration to get to them.
You have a riskless path, finishing the level right away, with a clear and tangible reward of progress. Then you have a risky path, turning away from the exit and continuing to fight through, with no real benefit.

Does that render the map entirely worth dismissal? Well, not entirely. If you don't care so much about progressing, and just want to explore for half an hour, then Hexcity is a decent timewaster to fill an afternoon--with large emphasis on "timewaster". There's nothing that will give you any sense of accomplishment after it's all done, but for something that has "no tangible reward" as its biggest sin, there are certainly far worse reasons to turn a map down.