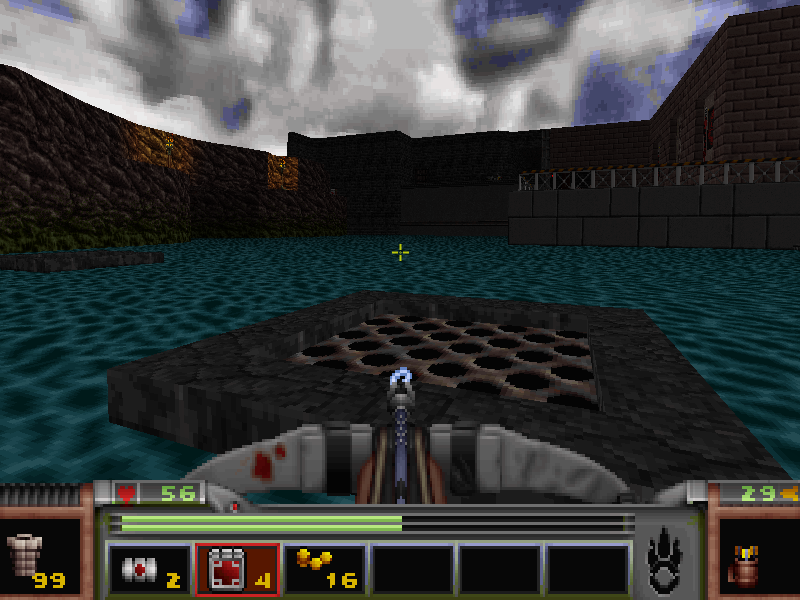 A World in Strife: Raiding the Dam by Adam "Khorus" Woodmansey

"Ah, I hear you rolling your eyes. If this sounds like standard fare for a Doom map"

How many of you know Strife? Well, obviously, you may know OF it, and maybe even ABOUT it, but how many of you know Strife like you know Doom?
At the time of this writing, Strife sits with exactly four mods for it on /idgames, which is a depressingly low number for a game so technically advanced. Still, though, it's always good to see something underappreciated get such a gem for it, and Raiding the Dam is quite a gem indeed.

Raiding the Dam may only have one single map, but it's a doozy of one--the map alternates constantly between open areas and closed corridors, and is a fairly gigantic trek from beginning to end. Despite the name, the player will find himself raiding far more than just dam, and will find themselves trekking through also a temple, a shrine, a cave, a town, a base, an arboretum, and even a prison. Enemies are spread everywhere, of course, and all of them hate you and wish to shoot you dead. Of course. The best response to this is usually to shoot them back--despite the alarms, there really aren't any options for stealth or a more subtle approach to combat. Once you're done, your 'ventures take a significantly more mundane approach as you skulk around for keys and backtrack to the different doors that require them.

Ah, I hear you rolling your eyes. If this sounds like standard fare for a Doom map, well, you'd be right. Let's just get this out of the way--this isn't so much a "Strife mod" as it is a "Doom mod that uses Strife". The gameplay is pretty much a straight run-and-gun keyhunt and doesn't take advantage of a lot of Strife's specific features, such as weapon upgrades, stats, or even dialogue. The only grudging concession to its daddy wad is a few stores placed at arbitrary points to make use of some coins scattered haphazardly around, which feels less like Strife and more like "Oh, yeah, I have to include some Strife features". Now, that's not inherently a bad thing. A Doom gameplay experience with Strife's weapons, textures, and enemies is still delicious Doom gameplay, after all. There's still plenty of action to go around, with a good 80% of the map featuring enemies coming out of different orifices of the map to shoot at you.

There are a few other things that stand out in this mod, and one of them is the music--all-original tunes composed along with a map is a rarity, and while they're not exactly Hans Zimmer they still go along with the environment pretty well. Though the introduction music seems to go on for a little too long, and the music of the arboretum lasting for all of a twenty second area, it all ramps up wonderfully enough and gives the player an excellent sensation of climax and progressing conflict. Another point of interest is the difficulty. Doomers are probably going to be hit especially hard at first due to trying to get used to Strife's weapons and enemies, and the enemy disparity seems specifically catered to this. Enemies are introduced slowly, giving you one or two at a time before swarming you with the bastards, letting you get used to them before the final sections bum-rush you head-on or from frustrating angles--simply masterful.

All of these facets combined create a map that is just fantastic to play no matter what way you look at it. While those looking for a "true" Strife mod perhaps will have to get their dream postponed for another time, Raiding the Dam is still a fantastic mod with excellent gameplay to satisfy both Strife fans and introduce new fans to the folds.